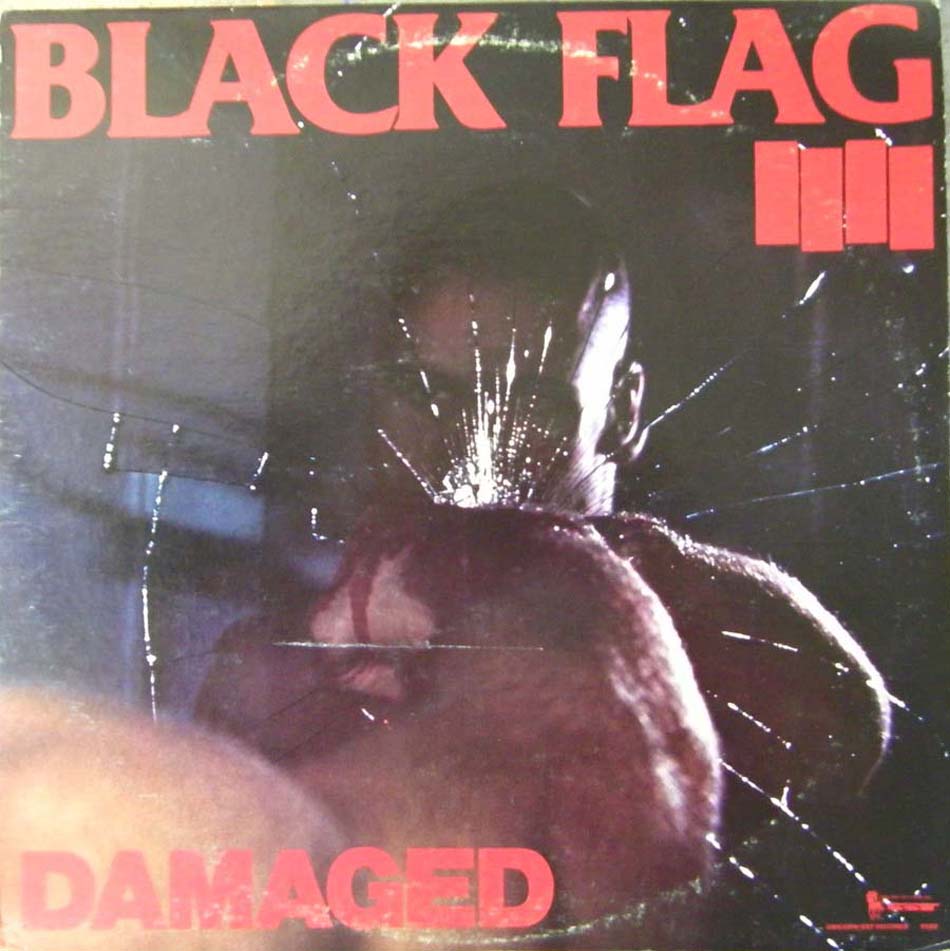 After a couple of attempts to make a full-length went sour since releasing their 1978 debut EP Nervous Breakdown, and having already gone through three singers, a 20-year-old by the name of Henry Rollins stepped up to the plate to take on vocal duties. Most of the backing tracks on Damaged had been recorded beforehand, and Rollins ended up having to overdub the vocals. And thus was born Damaged, Black Flag’s debut album, which was arguably, along with Minor Threat’s first EP, the first hardcore record.

Black Flag recorded the album at Unicorn Studios, which was owned by the SST label. Having been in a distribution deal with Unicorn, which at the time was associated with MCA, 25,000 copies were made in the initial pressing. It was only then that the president of MCA took one listen to Damaged and claimed it was “anti-parent” which lead to MCA refusing to distribute the already pressed and packaged record with it’s logo on the lower right corner on the back. So some of the Black Flag members went personally to the pressing plant and applied labels over the logo which read, “As a parent, I found it an anti-parent record,” which was the label head’s exact quote. SST decided to distribute the record as its own which then led to a legal battle.

Aside from all the business aspects of the record, not only did Damaged contain Greg Ginn’s choppy guitar riffs and drummer ROBO’s massive zig-zagging beats, but Black Flag was “emo” in a way, yet not by today’s sappy standards. Damaged was an album with which many disenfranchised kids could identify, expressing their outrage toward all forms of authority, be it at school, in a social context, the police and, yes, parents. Anti-social numbers like “Spray Paint (The Walls)” said it all (even though the track itself is only 33 seconds) with Rollins screaming “I don’t want to see the plan succeed/There won’t be room for people like me/My life is their disease/It feels good and I’m gonna go wild!” Charles Dukowski’s gurgling bass is at the helm of “Six Pack,” an ode to a generation’s preferred elixir, not to mention fuel, while anthems like “T.V. Party” showed that it was okay for one to be aimless with pride.

Sure, Damaged may have made its mark at the dawn of the MTV era but Black Flag’s fans didn’t want to see a bunch of fluffy haired British dandies play their sensitive synth rock. They wanted to rock out to “Police Story” and vent their brushes with the law. Numbers like “Gimmie Gimmie Gimmie” also gave the head bangers a taste as to what was to come as far as stoner metal and grind core were concerned.

On Damaged, Henry Rollins proved he could take a vulnerable kind of sadness and huff and puff like he was breathing fire on “Room 13.” When it’s all said and done, Damaged was and is still today a prime example of how an artist can vent their inner rage, depression, and misery in a way that’s rawer than open head wound.