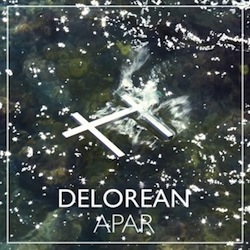 Delorean singer and bassist Ekhi Lopeteg described the group’s fourth album Apar as their “big production album.” This isn’t too far from the truth. Its predecessor, Subiza was mostly focused on beats, drowned vocals and heavy dance rhythms, which helped establish the band as a revered entity across the globe. Apar, however, takes the band’s approach a step further with a much more clean and refined sound. This is not to down play their previous efforts, by any means, but while Subiza was more like a happy mess, Apar has focus and direction.

Still holding on to the traits that garnered the Spanish group attention, Delorean start off the album with the slow drums of leadoff track “Spirit,” eventually building up to some gorgeous harmonies. Scaling back on sampled voices this time around, Delorean opt for actual vocals, such as with “Unhold,” a lush and rich track featuring the voice of Chairlift’s Caroline Polacheck, mixed and blended within the track to some great results. “Keep Up,” likewise, has a similar effect with its opening vocal arrangements. Instrumentally, however, there are just as many interesting developments to be found, such as on “You Know It’s Right,” which features an array of synths, drums and — why not — a smooth-jazz sax solo to end the track.

In addition to the new sonic territory the band unearths on Apar, they change their thematic focus as well, this time offering up a break-up album made with the intention of finding a solution to mend a broken heart. While this might be a bit cliché, it works to the album’s advantage and the result is something polished and exciting. The band has admitted to changing up their styles and trying to adapt a “normal” method to recording the album, in the midst of dealing with break ups and their homeland in a financial crisis. Despite the emotional and political backdrop of Apar, one can hardly detect the topics being addressed, but deep within those grooves, there are themes of love and loss to be found.

It’s only fitting Apar see release in September, a month often seen as the end of summer and a transitional period into the fall. Apar, itself, feels like a transition, echoing the melancholy of fall while having the bright feel of a summertime album. It’s here where the title comes in — translated from Basque, Apar means froth or foam, and evokes feelings of these sensuous songs washing in, as summer slowly ebbs.

Toro Y Moi – Anything In Return