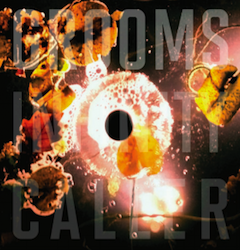 Everyone reading this review probably got their start in indie rock with a band that sounds a little like Grooms — a noisy rock band with a sensitive, approachable sensibility attractive to nerdy, young bookish or academic types. For some it was the shape-shifting, arty noise rock of Sonic Youth. For others, it was the hypnotic and powerful shoegaze of My Bloody Valentine. Some signed on to the Dinosaur Jr. league, others were Built to Spill seekers, and a few rowdy outcasts got their kicks in Archers of Loaf records. These bands were the refuge of those who grew weary of grunge but no longer found punk able to scratch that musical itch. They were special to us — we held them dearly like yearbook notes from members of the opposite sex we thought never actually knew our names.

Grooms strongly evoke the feeling of hearing these bands again, but I’ll spare you the ‘90s nostalgia mumbo jumbo. There’s little doubt that the members of Grooms, too, grew up on Sonic Youth and Built to Spill records, and probably get a little misty eyed at just the right frequency of feedback, but the New York City trio — formerly called Muggabears (a change for the better I’d like to add) — capture all of the best qualities of these bands without actually sounding much like them. And that — it should be noted — is not very easy to do.

To be fair, Grooms don’t go out of their way to evade nostalgia or referentiality; Grooms’ third album Infinity Caller pushes those buttons at different angles with songs titled “I Think We’re Alone Now” and “Something I Learned Today,” and with a dedication to shaping sonic effects in a way that evokes Kevin Shields’ own deceptive studio techniques. But a listen to opening track “Lion Name” evokes simultaneously disorienting and warm, fuzzy feelings. The riff feels exotic, spacious, and metallic — though certainly not metal. But once the verse begins, in comes an upbeat bassline and a sing-songy vocal melody to remind the listener that this is indie rock as you remember it: Catchy, pretty, and ever so comfortably weird.

By second track “I Think We’re Alone Now,” however, that exotic otherness fades away and what’s left is top-notch indie pop through a dreamy, gorgeous filter. That gives way to a hazy, slow psych-dirge on “Sleep Detective.” That transitions into the peppy, pop bounce of “Iskra Goodbye,” in which bassist Emily Ambruso takes over lead vocals. And somewhere down the line, on “Completely,” the group drops the noise-pop act briefly to slide into a riff that sounds far more like the Rolling Stones’ “Brown Sugar” than Ride or The Jesus and Mary Chain. More explicit nods aside, Grooms don’t so much capture a specific sound on Infinity Caller as a general feeling of warmth and harmony. It’s easy to imagine a kid in junior high hearing this for the first time and undergoing a sonic rite of passage. To be honest, I’m a little envious.