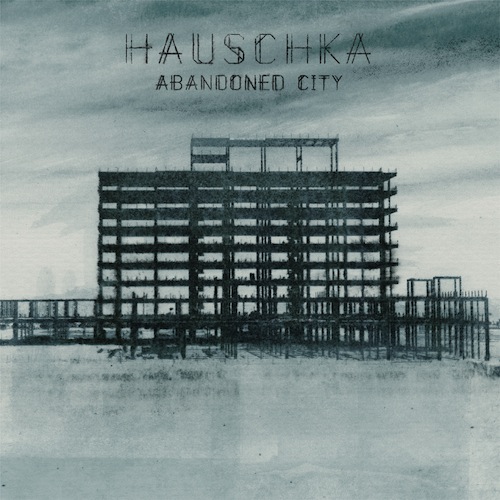 The cold and isolating hues of blue and grey that adorn the cover of Hauschka’s Abandoned City are somewhat misleading. While the album’s gorgeous and lush tones often hint at the loneliness and hubris that would ostensibly come with encountering an actual city that has been abandoned, the songs actually evoke a more playful tone. Much is often made of how cinematic instrumental and ambient music sounds, but Abandoned City truly does sound like the opening moments of some film where a character is granted a newfound sense of freedom and exploration in the concrete mountains of a formerly populated utopia.

Much of this is thanks to Volker Bertelmann’s inventive vision of his much-discussed use of prepared piano. By making his piano less a collection of keys and tiny hammers than a complete Rube Goldberg machine of noise and sound, Volker gives life to phantom strings and horns throughout. Abandoned City is at its strongest when these mirages are allowed to converse in almost freeform fashion, such as on the expansive rest stop, “Who Lived Here?” It’s one of the few times where the underlying sadness of an empty concrete jungle is allowed to boil over to the forefront. The rest is needed after the frantic nature of the album’s opening trio, which manages to be a unique collection of the frantically paced (“Elizabeth Bay”) and the oddly danceable (“Thames Town”). Hell, even “Agdam” sounds something like an acoustic techno track with its how-the-hell-is-this-not-programmed twinkles and stutters.

The sound is varied enough so that by the time one leaves the Abandoned City, it truly feels as if a journey of isolation and self-realization has been completed — though that journey is not necessarily your own. While the music is affecting and, at times, moving, there’s something dense and inexplicable that prevents Abandoned City from connecting on a truly human and universal level. It’s the soundtrack to some post-apocalyptic film that’s just good enough to view out of peripheral curiosity when it inevitably arrives on HBO or FX. The problem, then, isn’t in the admittedly jaw-dropping execution — seriously, how the hell is he getting some of these sounds?! — but in the conception of the ideas themselves. The songs are perfectly competent, but are also fairly by-the-numbers. What this ends up meaning is that Abandoned City is an album whose sum is ultimately less than its individual parts.