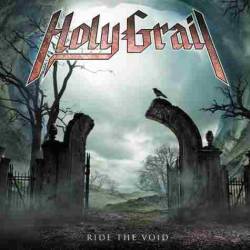 Heavy metal is a genre built on aggression and volume, and just about any other extreme you can achieve in a musical form — just to call something “metal” implies as much, and regardless of the sub-genre, niche or even narrower niche, it’s true across the board. But heavy metal can also be the most fun you can have with a guitar, a bass and a set of drums. There’s a reason those hyper-speed riffs and crushing rhythms have only gotten more exaggerated over time, and for that matter, why people continue to be entranced by the sounds of a guitar at its most wicked. The sheer power and catharsis of metal at its best is infectious.

Of course, when the style of heavy metal in question is, itself, of a more classic, accessible variety, that infectiousness goes double. One such purveyor of wild riffs and soaring choruses is Holy Grail, a band of Pasadena-based classicists with an ear for the anthemic. Their debut album Crisis in Utopia was an ’80s-style gallop of Maiden and Manowar proportions, with guitars spiraling in harmonized acrobatics, and choruses built for prize-fight training montages. That more or less holds with second album, Ride the Void, a 53-minute slice of NWOBHM-inspired thunder and thrash-tinged volcanism. This is heroic music, made to soundtrack feats of strength and triumph.

The differences between Ride the Void and its predecessor are mostly minor surface touches — the atmospheric prog intro “Archeus,” the occasional slowed-down interlude, an atmospheric slice of acoustic guitar here and there. But by and large, the aesthetic remains intact. As much as they ever were, Holy Grail remain a band whose central motif is chugging riffs and an unapologetic dedication to ripping guitar solos. And it pretty much all works; while the scale of variation on Ride the Void is fairly narrow, the success rate is pretty high. Be it the hot-dog showmanship on the title track, the harsher thrash of “Too Decayed to Wait” or the righteous hooks of “Crosswinds,” the pleasure factor here is maximized, even if the album might have been served better with a 40-minute running time. But then again, it seems a bit contradictory to praise a band for its excesses, only to condemn an entirely different set of excesses.

Ride the Void isn’t perfect, nor is it the first album of its kind. But to get hung up on a minor quibble goes against what makes this album so appealing in the first place. It’s not about innovation, it’s about taking a familiar idea and dressing it up with a little more dazzle and a truckload of fun. So, mission accomplished, then.

Dawnbringer – Into the Lair of the Sun God