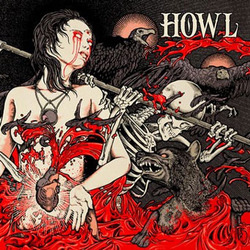 As sludge metal’s lifespan extends further into the future, its definition grows ever more nebulous. Once defined by the low-end churn of the Melvins, and later encompassing the wrist-scarred, slow-moving nihilism of early ’90s New Orleans, sludge has come to encompass a much wider swath of sounds. And appropriate or not, it’s become essentially a catch-all. The epic swamp-doom of Rwake? Sludge. Mastodon’s manic fusion of prog, hardcore and classic metal? Sludge. High on Fire’s stoner epics? Isis’ graceful post-metal? Yob’s thunderous monoliths? Yep — sludge, sludge and more sludge… more or less.

Categorization is sometimes a necessity born of an attempt to make sense of the unwieldy, and that essentially applies to any genre. Yet sometimes, it fits perfectly. For a band like Providence, Rhode Island’s Howl, sludge is at least a pretty accurate baseline column under which to slot them. Their guitars chug and gush with a thick slop of distortion, and vocalist Vincent Hausman has a raw, throaty growl that only enhances the muck they sling. Taken together, it’s an impressively ferocious snarl, and on their sophomore album Bloodlines, Howl blends it with a fantastic arsenal of hooks, riffs and altogether top-notch songwriting.

The straightforward gallop of first track “Attrition” gives a slight indication that the group is playing it straight, until about 18 seconds in, when new guitarist Jonathan Hall unloads some dynamite leads that recall Alice In Chains’ Jerry Cantrell’s own shredding. Not that Howl have gone grunge (though there’s probably a field day to be had between sludge and grunge). The heaviness of that first track only seems to intensify as the album progresses, chugging mightily on “Midnight Eyes” and rushing with menacing urgency on “Demonic.” Yet what’s most remarkable about Bloodlines isn’t how heavy it is, but how melodic it is; the arpeggio riffs in “One Last Nail” are insanely catchy, to say the least, while “With a Blade” carries the swampy boogie of classic Down or Corrosion of Conformity.

Howl excels at playing fiercely urgent, melody-driven sludge — this much is apparent early and often. But a closer listen reveals an even more diverse array of sounds at play. “Your Hell Begins” explodes with a blast-beat assault from drummer Timmy St. Amour. “Down So Low” lurches with an ominous, gothic darkness. And the ultra-slow intro to closer “Embrace Your Nerve” is the most heavily doom influenced of anything here. As confidently and effortlessly as Howl have conquered sludge metal on Bloodlines, they’ve clearly got even more tricks up their collective sleeves.