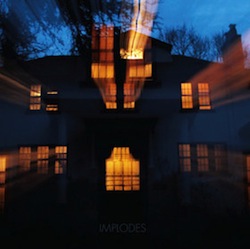 Whatever expectations one may have about Implodes’ second album, Recurring Dream, will inevitably be dramatically influenced by whichever song the listener hears first. It’s a dangerous album to play Russian roulette with, each chamber loaded with an entirely different surprise. Leadoff track “Wendy 2,” for instance, is a stark, eerie drift of instrumental ambience. “Scattered In the Wind,” however, is a dense, effects-laden shoegazing post-punk track, which is a step closer to more conventional songcraft. Yet track four, “Zombie Regrets,” is a heady electronic drone, which takes the album in another direction entirely. Stylistically speaking, there’s very little gravity on Recurring Dream.

Where the Chicago shoegazers allow themselves free rein aesthetically, they maintain a much more consistent mood of melancholy and gothic moroseness. Recurring Dream, like early Cure albums, is defined more by the atmosphere it creates than how strictly it holds to a particular sound. Implodes leap nimbly from one sonic approach to the next, at one moment giving over to gloomy, gothic dirge like “Sleepyheads” (or a slightly dreamier variant like “You Wouldn’t Know It”), and in another, an oblique drone piece like “Dream Mirror,” zoning out and abandoning typical song structure for the sake of delicate, dreamlike ephemera. Yet the distance between the two is only as large as their arrangements sound; at the core, each Implodes song is a work of somber grace, sometimes skeletal and stark, other times mighty and dense.

To the band’s credit, those stark and skeletal pieces work just as strongly as the more fleshed out pieces, but they have a tendency to feel more transitional, bridging together pieces on either side rather than feeling whole in and of themselves. And with impressive dream pop tunes like “Melted Candle” on the other side, there’s a lot more to sink one’s teeth into when the band set their gaze to bigger, bolder sounds. Recurring Dream, however, is more than the sum of its parts, an impressive statement in atmosphere above all, with more than a few excellent songs keeping up the momentum.

Still Corners – Creatures of an Hour