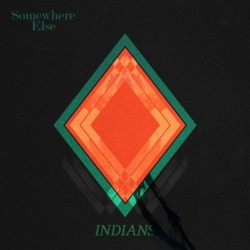 A performer has never needed anything more than a guitar, or a piano, and a microphone to play a song and make it something special. It’ll be stark or simple, but it nonetheless can sound whole, as if nothing is truly missing, even if it can indeed be enhanced. Yet the ability for songwriters to make bedroom symphonies has only gotten easier over time, and anyone with a laptop, a mixer and some weekends to spare can conceivably put together a professional, even opulent piece of work in the privacy of their own home. It’s only natural to want to seek more ambitious territory, to become something bigger than oneself. If you don’t have any limits on what you can do, why bother imposing them?

Søren Løkke Juul, the singer and songwriter behind Denmark’s Indians, is, himself, capable of building up to some rich and lush sonics, yet understands that there are sometimes greater rewards in exercising restraint. Juul is the sole musician on Indians’ debut for 4AD, Somewhere Else, and through much of the album, he doesn’t bother with trying to convince the listener otherwise. “New,” the first song on the album, is a notable exception, not so much an exercise in excess as it is a balance of richly fluttering synth textures that allow for ample space. But from there, Juul doesn’t often allow for much in the way of rise or climax, sticking to a spare keyboard arrangement on “Bird,” strumming a reverb-heavy acoustic guitar on “I Am Haunted,” a barely-there twinkle on “Lips Lips Lips” or an even sparser acoustic arrangement on “Cakelakers.”

Yet the common thread throughout Somewhere Else is that, for how little there is to Juul’s songs, there are scarcely any moments that seem unfinished or spread thin. The key is partly in Juul’s choice of instrumentation — a synth can often yield richer results than anything else, simply by virtue of being unbound by analog constraints. Yet part of it is that Juul writes melodies that stand on their own, sometimes spacious and ethereal, but always able to exist without the need to be propped up by anything else. Somewhere Else is a pretty and effective display of simplicity that when Juul does add a new element, like the clapping beats on “La Femme,” an otherwise spare track can sound that much bigger.