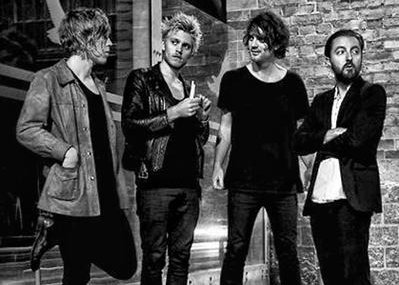 Blindfolded, they are led out of the back of the white, nondescript van by a roving band of harpies thirsty for vengeance. It is like a “Hostel”-meets-“Beyond the Valley of the Dolls” fever dream: a wallpapered crate of a room lined with instruments for entertainment and for torture. Dragged further into this menace, the unsuspecting Swedish lads do as they are told, lest they get whipped and mercilessly prodded by their virile captors. A punishing game of cat and mouse ensues, finally resulting in the frightened men’s victory. Three of them manage to break through the sordid walls, Shawshank-like, while the boyish remainder scrambles for his own exit. In the jam, the eldest of the bunch breaks his finger.

You think you’re rock ‘n’ roll enough to handle the Royal Concept? Well, brace yourself, because scenarios like this happen all the time when they’re around. Granted, this was the plot of their debut music video, but the fervor is real.

The foursome is a no-holds-barred gang of ruffians here to take over the dance floors and American music charts. Their captors in the video were, of course, modelesque women, foreshadowing what will inevitably come to be for these charming gents in the United States: total pandemonium.

Undies will be thrown. Tits will be signed in Sharpie. Your girlfriend will threaten to leave you for swaggering front man David Larson. Cocksure and — more importantly — über talented, the indomitable Swedes are poised for a good old-fashioned hostile takeover of the airwaves.

Picking up where French sensations Phoenix left off, the Royal Concept piece together the effervescent drumming style of Frans Povel (touring sticks-man for Robyn) and crunchy licks with the boy-meets-foxy-lady lyrics of Filip Bekic. Oh, this foursome loves the women-folk — the more emotionally damaged, the better. Diatribes in their roster include a story about a stripper who stalked Larson (“Naked & Dumb”) and an ode to a sexually frustrated filly (boisterous single “Gimme Twice,” the song that accompanied the hellacious video described earlier).

“[Women are] always an interesting topic for us. We all like women. We’re surrounded by them, and we think they’re beautiful,” says Bekic over the phone, en route to his band’s first San Francisco gig. He adds, chuckling, that when the relationships are bad, they make better songs.

The only consistent relationship for the Royal Concept has been with music. Bekic was forced into learning the violin as a youngster by his dad — a discipline encouraged widely in Sweden — but he soon found guitar to be a sexier choice of instrument. When forming his current group a few years ago, the members bonded over their childhood servitude to parentally imposed talents. But because each really possessed a knack for the art, they all kept at it. Bekic proclaims that no one in the band has ever held a job outside the music profession, and they intend to keep it that way.

Productivity is their ally in this quest. In a mere six weeks, the Royal Concept wrote and recorded nearly 20 tunes, all in a tiny basement studio in Stockholm. The five-song, self-titled EP (Lava/Universal) that resulted is an in-your-face juggernaut. “Gimme Twice” leads the pack of these pugnacious numbers, softened only by an out-of-left-field icy ballad called “In the End.” To be so well rounded on an intro recording is a boon, a fluke — one that has ensnared American audiences and the blogosphere.

Their recent go-round in U.S. clubs has garnered them some highfalutin fans. Aerosmith’s Steven Tyler personally invited the band to join him for a preview of his upcoming record in New York City, the Concept’s temporary home away from home. The land of apple pie and baseball has a mutual appreciation for these Swedes, as Bekic relays.

“Swedish audiences are more skeptical and quiet. They don’t dance and stuff like that. They just kind of look at you, blinking. … But here, it’s love at first sight with the audience,” he says gratefully. And then in a characteristically sardonic beat, he continues: “Maybe it’s because we’re so catchy.”

He laughs, but modesty isn’t needed with the Royal Concept. This Nordic brand of charisma and personality is manna to today’s easily bored and unimpressed listeners. A live set by the quartet is as sweaty and rollicking as a Ramones show in CBGB’s heyday. Larson is a testy kangaroo, bounding to the far corners of the stage. Bekic’s fingers fly, treating his ax like a hot potato. Veteran drummer Povel sits upon his throne and fires off rhythms like a firing squad. Bassist Magnus Robert lets his hair down as he plays his instrument like a weaver at a tapestry. A fire is lit, ironically from one of the coldest regions on the planet.

Next in the pipeline for the Royal Concept is an ambitious crisscrossing of the States alongside Wolf Gang. A full-length album is on track to surface sometime in October, but being unsatisfied with anything less than awesome, Bekic said they were still tinkering with the final product. They’re hoping to play Coachella 2013 and further expose themselves to a wider audience. And break a few hearts in the meantime.