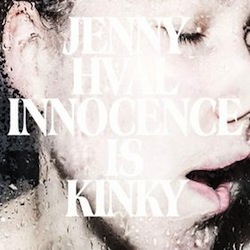 In an interview published in May, Jenny Hval said of her music, “My work is not meant to make people happy or give them an escape.” It’s not uncommon for a musician to evade easy pleasure or accessibility; take Swans, for instance — an artist whom Hval admires — whose music has often served as visceral endurance tests rather than tunes you could sing along to. Hval’s music, however, isn’t so violent, but rather quite the opposite. The Norwegian singer-songwriter’s first few albums explored prettier sounds and hushed atmosphere, but mixed with literary sophistication and a blunt focus on eroticism, the likes of which don’t evoke a fantasy but an almost shocking sense of realism.

It’s that focus on eroticism where Hval’s music can be almost uncomfortably intimate. On her 2011 album Viscera, she opened the record by describing an alternate use for an electric toothbrush. And at the beginning of her new album, Innocence is Kinky, she’s engaged in similar activity: “That night, I watched people fucking on my computer/ Nobody can see me looking anyway.” A buzz of synthesizer hums in the background, a guitar scratches, and Hval is barely above a whisper, but it’s hard to draw focus away from her voice. And there she is, sharing this uncomfortably intimate space, but her performance is powerful and empowered — it may not be comfortable, but it’s most certainly compelling.

Hval finds various outlets for that kind of itchy, sweaty intimacy throughout Innocence is Kinky, sometimes on a whisper-quiet electronic track like “Mephisto In the Water.” But Hval stands out strongest when she lets loose a little, allowing producer John Parish to bolster her harder rocking songs with an exclamatory punch. A bluesy waltz like “I Called” will immediately bring to mind the sound of another Parish collaborator, PJ Harvey, though Hval doesn’t attack with the same level of violence or harshness that Harvey often has. Yet there is a playful approach to production that can sometimes fuck with the listener’s perception. “Give Me That Sound” goes back to the hushed spoken-word vocal style that opens the record, but quickly blows into a squeal of feedback, and a distorted statement that, “I have a mouth, and I want to sing like a face that is split open/ I want to sing like a continuous echo of splitting hymens.” It probably shouldn’t come as a surprise that this track was born of a sound installation, though its abstraction renders it no less jarring.

Yet simply being provocative doesn’t mean that Hval’s goal is exclusively to be difficult. In fact, Innocence is Kinky is downright beautiful, particularly closing track “The Seer.” It’s a droning, ambient hymn, with Hval poetically narrating various aspects of her own voice, only to close with a spoken reassurance, “My body is the end.” The revelation is all too appropriate, a closing bookend to an album that begins with the voyeuristic observation of others’ bodies. Hval is merely reminding the listener that, as the album has coursed through different confusing and sometimes anxious spaces, she has been in control the whole time.