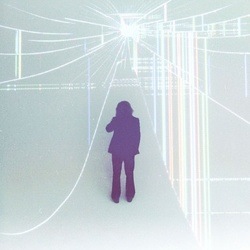 If somebody asked me to sum up Jim James in the present vernacular, I’d have to say that he’s a man of mad swag. In the Shakespearean sense. That summation might initially sound strange, considering that popular culture generally sticks that descriptor with machismo-laden rap artists, but Jim James equally exemplifies the word in an entirely different way: instead of stacking dead presidents on the corpses of rival artists to defy the world (caricature though that might be), the My Morning Jacket frontman turns in on himself and crafts Regions of Light and Sound of God. And if that title sounds a little ostentatious to you, then you’re on the right track.

That track takes you into the opener, “State of the Art (A.E.I.O.U.),” which serves as a suitable mission statement for the album. Even though he’s flying solo here, using crisp, reverb-light production techniques, James still has plenty of soul. Of course, you don’t need me to tell you that, as Jim croons it much more pleasantly than I could, “I’m using the latest technology…it ain’t using me.” Indeed. And he uses it quite well, too; while some artists handle self-production like a kid in a candy store — ahem, Wintersun — Jim James pulls it off smoothly, never going overboard with the synth orchestral arrangements and keeping things focused.

The content on Regions of Light and Sound of God is focused, too, as James stakes out that oh-so-coveted territory within “cohesive” and outside of “monotonous.” Though the album is inundated in influences from classic rock — Traffic on “State of the Art;” Bowie on “A New Life;” The Beatles (although closer to White Pepper Ween) on “Dear One;” and Elton John throughout — he establishes this cohesion by generally doing a good job of making them his own, tastefully adding synthesizer tracks and showcasing some astute songwriting by taking familiar sounds in new, more spacious areas. Good examples of this are the aforementioned “Dear One” and the excellent “Of the Mother Again,” which runs vague philosophical ruminations through a quick backbeat and into a soaring rock song.

Of course, James is taking a calculated risk with creating something like Regions of Light and Sound of God, and it doesn’t always work out. The weakest links in this album all come when he gets bogged down in campiness — something that has always been there for James, and has been negotiated with varying levels of success in his career. His clear self-awareness (and the swagger that allows him to own this campiness) goes some way in mitigating the issue, but the problems often can’t be ignored and detract from what he’s doing. Case in point is the final duo of tracks on the album, the first of which (“All is Forgiven”) shows James attempting to morph into Marvin Gaye and succeeding in inadvertently imbuing one of the more serious songs on the album with a tongue-in cheek tone. The final track, “God’s Love to Deliver,” is an even more confusing case, as JJ opens with the lyrics, “I have a dream / Oh, Dr. King, well, I know what you mean…” Unfortunately, a fey ode to MLK is the exact thing that this album didn’t need, and the overall work suffers as a result.

That said, not even these faults can derail what James accomplishes on Regions of Light and Sound of God. He’s showing off here, for sure, and not giving a fuck what people think, but he’s also demonstrating himself to be a mature artist who continues to grow creatively and expand his scope. That, above all else, is why I find this album so likeable. Not that there’s anything wrong with stacks of money, A$AP.

George Harrison – All Things Must Pass