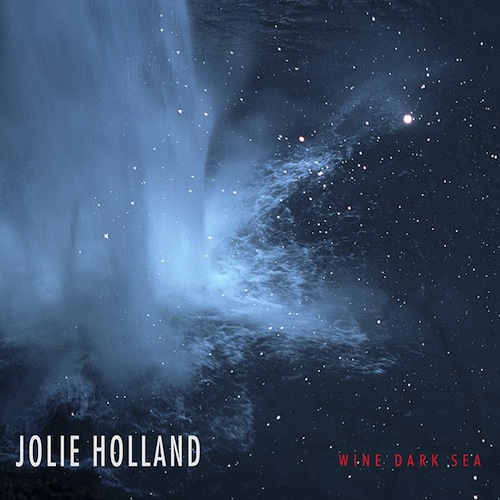 Jolie Holland‘s name should already be familiar to any fan of the darker side of modern Americana. For over a decade, the Houston native has been putting a sophisticated-yet-gritty spin on country, folk and blues. In that relatively short time, she has released five studio albums — including 2004’s excellent Escondida and 2006’s similarly solid Springtime Can Kill You — and built up acclaim from fans, critics, and even Tom Waits — the godfather of dark, twisted, mutant blues.

On her sixth record, Holland offers another 11 songs of longing, supporting her energy-drenched alto; coarse, yet beautiful as always. But what makes Holland stand out on Wine Dark Sea, after five well-crafted albums, is the extra grit and despair she packs in over the course of the album. Sure, these tunes are rooted in blues and country, and that tradition shines through and through. But, not unlike the aforementioned Waits, Holland takes on particular strategies to infuse these genres with a destructive sort of energy, more reminiscent of early ’90s grunge and alternative than the mid-20th century pop that inspires much of Holland’s melodic and rhythmic sensibility.

Her methods for adding these looming shadows vary. On tracks like the steady-paced “Route 30” and the funkier “Waiting For The Sun,” a slight guitar crunch adds tension and urgency to her compositions. But others (“On And On,” “Dark Days,” “Palm Wine Drunkard”) use space to create a very different sort of tension — looming and intimidating. Throughout the entire journey, that voice — Holland’s distorted, howling croon — holds the essence of the record together, serving as an anchor as each song warps and stretches forward.

Take almost-title track “Out On The Wine Dark Sea,” for example: The instruments crank, swell and swirl in a steady, but unsettling frenzy as Holland’s delivery cuts through the circular motion, a platform for the listener to stand on. It’s a fitting title(-ish) track for a delightfully disorienting record. In truth, there aren’t many artists who combine beauty with discomfort in the way Holland does here.  On Wine Dark Sea, she shows enough spunk and grit in her sound for it to stay fresh and unpredictable a good while longer.

Jolie Holland : Springtime Can Kill You