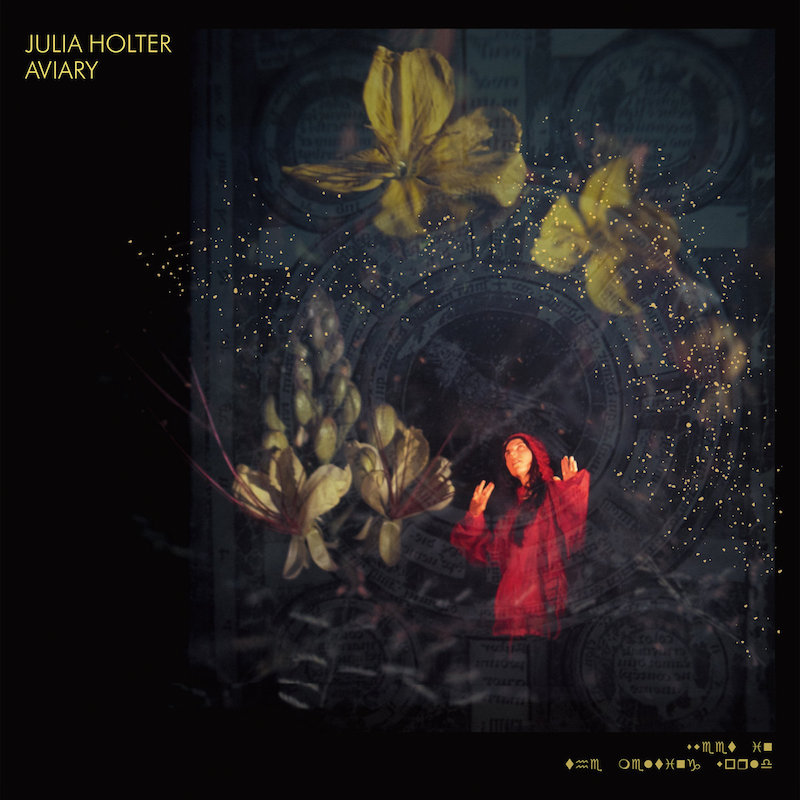 The opening notes of “Turn the Light On,” the first track from Julia Holter‘s fifth album Aviary, are unusually jarring coming from the Los Angeles-based artist. Her music is often beautifully spacious, richly detailed but never overwhelming. “Turn the Light On” bears no such resemblance to the most serene moments on 2015’s Have You in My Wilderness or 2013’s Loud City Song. It’s a chaotic crash of shrieking strings and bashing cymbals, Holter own vocals just barely providing some kind of structure to what sounds like two orchestras colliding in one frenetic explosion of sound. Who knew Holter had this kind of sonic devastation in her?

The manic rush of sound is intentional; “Turn the Light On” is an introduction to an album that’s, ostensibly, tied to the low-level panic that plagues most Americans, Brits—well pretty much everyone in the world with access to a screen right now. In her own words: “it’s about a seeking for compassion and humility in a world where it feels like empathy is always being tested.” And the music is a translation of that frustration and struggle, as she recently told Bandcamp: “I really felt like I needed to immerse myself in cathartic sounds.” The title itself, Aviary, nods to the opening of a short story by Etel Adnan that opens with narration from within an aviary of shrieking birds. Holter, then, is providing her own approximation of those birds, all squawking in dissonant union, an overwhelming canopy of almost physically imposing sound. That’s what waking up in the morning sounds like in 2018, psychologically if not literally.

The genius of “Turn the Light On,” however, is how over repeated listens it grows into something beautiful, something powerful, much as the best of Holter’s compositions do. Aviary is rife with such compositions, its 15 lengthy tracks testing all of the limits Holter had already set in place. It’s her most intense album, and likewise her strangest album, and just to make matters more complicated, by far her longest. Moments like “I Shall Love 2,” the first single from the album, tend to be outliers—a measured, lushly arranged art-pop song rife with delicate details, it gives the illusion of simplicity while offering up various moments of breathtaking intricacy. Yet as a love song, it offers a strange feeling of uncertainty and panic. “I am in love/ What can I do?” she asks. It’s there that the single ties into the overarching aesthetic and feeling of the album, which is mired in darkness and anxiousness, as evident in the air-raid siren sounds of “Everyday is an Emergency” and the hyper-ventilating chorus of “Voce Simul.”

Amid the external and internal horrors that Holter navigates are some of the prettiest, most expansive songs she’s ever written. Over time she’s grown closer to the art-pop abstractions of Björk, and though Aviary exists in its own tonal and compositional space, the connection is undeniable in a track like “Another Dream,” rife with twinkling acoustic elements and disorienting electronic edits. The diversity of the material shows a great deal of playful growth on Holter’s part, however. She delivers dreamy, fractured pop with cartoon timpani on “Underneath the Moon,” dystopian synth landscapes on “Colligere,” eerie drones on “I Would Rather See” and even a marching post-punk darkness on “Whether.”

The diversity and expanse of Aviary could be heard as a kind of disjointedness. This isn’t Holter’s most immediately pretty material, though it doesn’t take long to hear the beauty of it. Rather, these tense and sometimes abrasive compositions provide a sort of comfort to the listener in a different way, as if to say, “I feel it too.” Getting there is more involved, and perhaps uncomfortable at times. But throughout this masterful and breathtaking set of songs, Holter guides the listener through the dark only to leave them in a much more warm and comforting place.