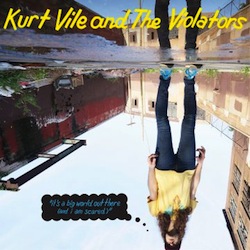 Kurt Vile has yet to release a perfect album. That’s not a knock on the Philadelphia singer-songwriter, who’s practically immune from actually writing anything bad or even sub-par. It’s more that Vile thrives on warmly scruffy, scuffed-up and sometimes charmingly insecure songs that actually might lose much of their appeal were they tightened up too much. What made 2011’s Smoke Ring for My Halo and 2013’s Wakin on a Pretty Daze so successful were how effortless they felt at times, as if, much like the former’s album cover depicted, Vile just got comfy on his couch and started strumming away — and out came some of the best indie-folk songs of the past half-decade or so.

It’s a little more complicated than that, though. Sounding as effortless as Vile does might come naturally, but translating that into great music takes a fair amount of edits, drafts, overdubs and studio experiments to get just right. It’s arguably never sounded as right as it does on Wakin on a Pretty Daze, and the bonus disc to its new deluxe edition — released as a standalone EP titled It’s a big world out there (and I am scared) — is essentially a batch of table scraps, but in addition to that, a brief glimpse into how the sausage gets made.

Of the seven tracks on It’s a big world, only two will be entirely novel to listeners — “Feel My Pain” and “The Ghost of Freddie Roach.” As bonus tracks go, they’re each exceptional, loaded with the gentle melodic sensibility and charming melancholy of all of Vile’s best songs. “Freddie Roach” is the real standout, though, its production louder and denser than its partner’s, and with a soaring, epic feel about it. The bulk of the song comprises guitar riffs and solos, but sounds organic rather than excessive. Just as with the best of Vile’s recent work, it’s an easy song to lose oneself in.

Beyond those two new tracks, however, It’s a big world is mostly alternate versions and reprises of Pretty Daze material. That’s not terribly surprising considering the EP is intended as supplementary material for the album, and as such, most of it isn’t really essential if you already have the album. The ‘string synth’ version of “Never Run Away” is pretty cool, essentially a more fleshed out version of the album version, and “Snowflakes Extended” adds a couple more verses to “Snowflakes Are Dancing” rather than fading out after three and a half minutes. But the rest — an instrumental version of “Air Bud” and two (two!) reprises of “Never Run Away” — don’t really add much to the experience outside of showing what got left on the cutting room floor, and to reinforce that songs that come as easily as Vile’s do still require a lot of time and effort to really bottle that vibe up tight. That could very well be of value to some listeners, but the best parts on It’s a big world are the ones that are actually new.

The War on Drugs – Slave Ambient