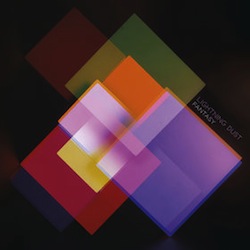 A quick look at Lightning Dust‘s top downloads on Amazon’s MP3 store shows that “Diamonds” is the band’s most downloaded track. One listen and it’s easy to see why — it’s endlessly catchy, its syncopated beat rolling like a flashback to a time when Annie Lennox and Fleetwood Mac commanded the radio. It’s in good company, though —  sparse synth-pop beats, drum-loops, and powerful vocals comprise the whole Lightning Dust’s third full-length album, Fantasy. The album harkens back to an idyllic ’80s synth-pop sound, delivered it on the strength of Amber Webber’s rich, yet delicate and powerful vocals, all buttressed by the electronic programming of mastermind producer Josh Wells.

While “Diamond” stands alone as one of the strongest tracks on the album, another single, “Never Again” — originally written and released in 2011 — is an anthem that successfully captures the angst and triumph of a moment that can only be described as epic. Webber’s vocals merge and separate from the electronic tones of the digital age that Wells has captured with his masterful programming and sparse composition. Lyrics like “We move slowly to keep them from wondering where we’ve been . . . in the evening when they shoot you through the sky,” culminate in the heart-wrenching line, “Did you recognize when you were seventeen and on a landslide.” A nod to Stevie Nicks? Sounds like it.

Against the backdrop of the rest of the album, “Never Again” appears to be the reason Fantasy exists at all — the album immediately reveals itself a vehicle designed to shuttle this one, epic song to listeners (who somehow missed the single when it was released). Webber’s tones are angst-filled, her voice an instrument that expands into a musical prism where sorrow and regret echo against walls of sound. But there are other standouts on Fantasy, such as “Loaded Gun” and “Fire Me Up,” faster paced tunes with an urgency and a carefully harnessed energy that evoke Annie Lennox at her strongest, while fronting the Eurythmics. Webber even manages to capture that detached, simultaneously intriguing and chilling robotic tone in her vocal delivery. In “Loaded Gun” she sings, “I know they’re still living inside, I’ll stay here forever, to hide,” and we’re left with the impression that something’s being ripped away from the narrator, very possibly her humanity.

There are introspective tracks and power-filled tracks, and haunting ghostly songs that set an eerie X-Files tone — moods carefully articulated by Wells’ Wurlitzer and Webber’s acoustic guitar. Nothing is missing from the exploration into this new, musical territory for Lightning Dust. And honestly, it’s hard to imagine a scenario where a listener either familiar or new to the band won’t be completely in love with it.