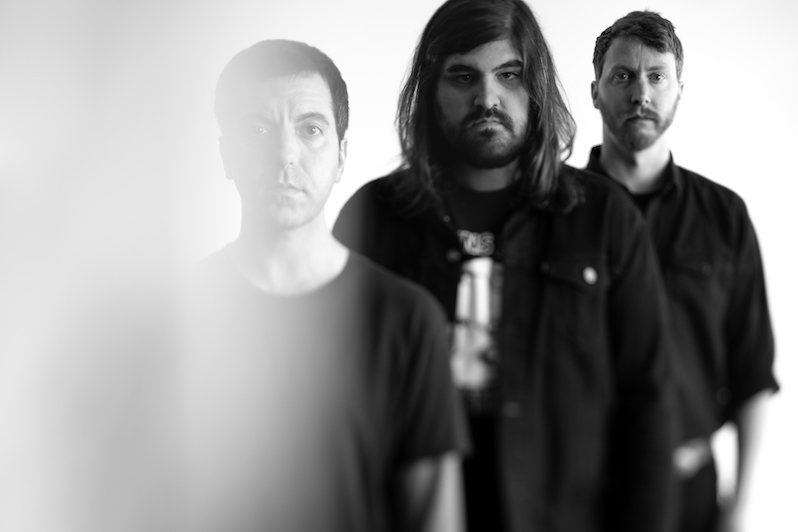 On Friday, Chicago post-hardcore trio Luggage will release their new album Shift via Corpse Flower Records. The album carries an abrasive mixture of tension and minimalist structures, taking the brawny punch of a band like Shellac and treating it to more meditative, almost drone-like passages. Yet when the band hits, they hit hard, delivering something that leaves an impact, regardless of their ability to use stillness to their advantage better than most guitar, bass and drums combos. Before the album’s released, stream it in its entirety below.

We also interviewed the band about the inspiration behind the album, how Chicago played a role in informing the mood and feel of the record, and what draws them toward harsher, more abrasive textures and techniques.

As a band that plays loud, intense music, but with a background in minimalism, how does the songwriting process typically work? Are these songs more carefully composed, or is there some level of loose in-studio jamming involved?

Luca Cimarusti, drums: The songs are almost entirely written in jams at the practice space. I find the most important part of creating something together is getting into the same headspace. There’s a certain mood we have to find to really get the juices flowing.

You’ve said that Chicago heavily informs the record, which is at once sleek and abrasive. Is that reflective of how you view the city itself, culturally, architecturally?

Michael Vallera, guitar/vocals: I think the city informs the record in the sense that we are always observing and talking about how it functions on a day-to-day basis. The way the severity of the seasons wears on the infrastructure, or how the whole place just terminates into the lake in a series of giant concrete partitions. There is always a combination of beauty and decay. I think that can be said for many places, but the way in which it happens here is something that definitely influences the aesthetics of the band.

The Midwest and Chicago specifically has had a long history of interesting underground music with its own character. What do you think sets Chicago apart from other scenes throughout the U.S.?

MV: I’m not sure there is a way to objectively answer that, but I do believe the music and art in a particular place is largely informed by its environment. Chicago is a working class city built on what seems like an endless grid. I think there is a particular attitude towards making music here built on that ethos of workmanship, and no-nonsense approach to creating something.

Is there something particular that draws you to the tension and sometimes harsh aesthetics of the record?

Michael John Grant, bass: It comes out organically. I don’t necessarily know what that says about our personalities, but everything on the record is a true representation of us in one way or another. I think we all have tension to deal with, but this is our way of explaining it.

Does taking a less-is-more approach become more challenging over time, or are you always seeing new possibilities the longer you cultivate and develop Luggage’s sound?

LC: Part of what makes playing in this band so satisfying is trying to find new ways to create more with less. I feel that as far as that goes, the possibilities are endless. With each of our releases, the approach becomes more raw and stripped down, and I feel like we can keep going in that direction while still keeping the songs powerful and interesting.

What do you want listeners to take away from hearing Shift?

MJG: I want people to understand the lack of a filter, and that there is nothing false about the music and the people making it. We lay everything out for you to really inspect what we are doing and have nothing to hide in our songwriting or production.