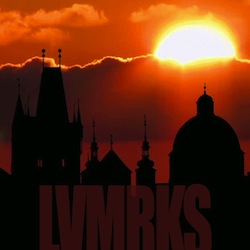 Judging by their collective résumé alone, the members of LVMRKS should, by all rights, be making something massive and noisy. Frontman Neil Busch previously spent some time playing bass for art rock bruisers …And You Will Know Us by the Trail of Dead, a band who never found an idea that was too big for their ambition. Drummer David Clifford has done both noisy and epic, with the VSS and Red Sparowes, respectively. And bassist Jonathan Hischke briefly played bass with math-rock destroyers Hella, before contributing to sample-laden pop project Broken Bells. With a background like this, it would seem only natural that LVMRKS’s debut, Pale Fairytale, should, itself, be something that booms with God’s wrath, not so much broadcasting through headphones as echoing through canyons and flattening cities.

LVMRKS, it turns out, aim for something subtler. Pale Fairytale definitely rocks, and for a trio, exorcise something maximal despite the odds against such for a three-piece. Yet for a group of musicians who have earned their stripes by blowing speakers and rendering earplugs futile, Pale Fairytale seems far more intimate and quietly dark. It’s an album that makes sense at night, its cool, surf-inspired guitar licks and haunted hooks comprising an intriguing, mysterious, yet powerful whole.

The repetitive, descending riffs that open first track “Blue Eyed Suicide” almost seem to indicate a foray into classic doom metal, but it’s a ruse; what transpires, instead, is a strangely psychedelic garage-pop dance party. It’s got a touch of B-52s and what sounds like fleeting plucks of sitar. In context, it’s an odd mixture, but LVMRKS transform a combination of odd influences and elements into a damn groovy end product. There’s a greater punk urgency to “Valentine,” a lush surf jangle to the excellent title track, and some ‘50s-style old-time rock noir on “Sidewalks of the Dawn.” LVMRKS cover a lot of ground, and do so without overloading their sound with unnecessary window dressing. Which isn’t to say they don’t find the right time to mix in some extra instrumentation here, or a cool effect there, but not without good reason. Like shadows under streetlights, LVMRKS’s melodies stand out most prominently when left to stand on their own.

Mock Orange – Mind Is Not Brain