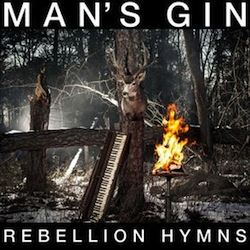 As the drummer of Denver post-black metal band Cobalt, Erik Wunder has played a pretty major role in subverting expectations of heavy music. His occasional flourish of gunfire blast beats were the closest the band’s 2009 album, Gin, ever came to traditional black metal, he and songwriting partner Phil McSorley instead building a wall of avant garde sludge around a blackened core. Jarboe, ex-vocalist of post-punk planetsmashers Swans — whose ominous and aggressive tone played a significant influence on Cobalt’s music — likewise lent her vocals to that album, which also featured a rustic blues song as a hidden track, and an image of Ernest Hemingway in his army uniform on the cover. For black metal — if that’s really what Cobalt is, which is debatable — Gin is a surprisingly human interpretation of it.

As the singer and songwriter of Brooklyn’s gothic folk band Man’s Gin, Erik Wunder also plays a significant role in subverting expectations of Americana. The band’s 2010 debut, Smiling Dogs, mined the coal-black balladry of 16 Horsepower and Nick Cave and the Bad Seeds, which is pushed to an even more intense degree on the slow-smoking embers of sophomore album Rebellion Hymns. A fair amount of information about the album can be gleaned just by spending a minute surveying its cover art. A literal trophy buck rests against a tree in a stark wood, strewn about with broken instruments and open flame. And the typeface and framing is borrowed pretty blatantly from Swans’ singular, bold aesthetic.

Rebellion Hymns feels very much like a walk into this ominous forest scene, with sounds of classic country and folk tweaked and amplified until brought to a caustic boil. At their most quiet, like on opening track “Inspiration,” Man’s Gin can be a vessel for aching beauty and crippling dread, minor-key piano and acoustic strums guiding a slow and mournful path toward a climactic end, wherein Wunder shreds his voice as if the final lingering threat of sanity has fallen into the void. The faster tracks, meanwhile, aim for the gut in a much more visceral manner, “Old House (Bark at the Moonwalk)” delivering a chilling post-punk horror and “Deer Head & The Rain” rises from strums and bongo percussion to an increasingly loud, noisy and eerie apex.

In between blocks of songs there are atonal, ambient interludes, with clangs of piano strings that echo the sight of smashed piano keys on the album’s cover. And while they come and go quickly, they provide a more explicitly cacophonous counterpoint to the more melodious, slow-burning statements of internal torment that Wunder & Co. so gorgeously orchestrate. While the instrumental tracks may be the most difficult ones to listen to on a purely musical level, there’s a lot more pain to unpack in a gorgeous, simmering epic like “Sirens,” in which Wunder bellows, “I work to drink myself to sleep” and “I can’t trust anyone I see.”

To the extent that Man’s Gin pack their songs with fear, depression and tragedy, Rebellion Hymns is still a highly approachable piece of music, bearing few if any similarities to the visceral metal sound that Wunder cultivates with Cobalt. Several songs are even genuinely catchy, like the gothic tango of “Off the Coast of Sicily” and Jayhawks-gone-grunge anthem “Never Do the Neon Lights.” This adherence to a prettier, stark approach to songwriting makes a cry like, “why did she die… and who the hell will stop my going blind?”, from “Varicose,” hit with much greater impact. The bare expressions of anguish and emotion on Rebellion Hymns, frankly, are too poignant to try to smother with noise and distortion.

Angels of Light – We Are Him