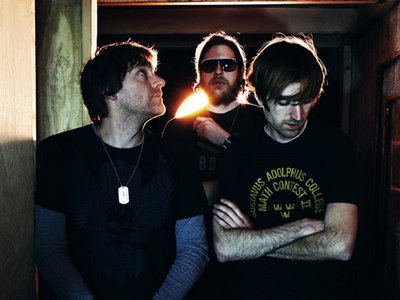 A Place to Bury Strangers’ MySpace page lists the Brooklyn band’s genre as “Total Sonic Annihilation.” To some, that might come off as absurdity or kitsch, but if any rock band can lay claim to such a terrorizing description, it’s this distortion-loving trio. Guitarist/vocalist Oliver Ackermann, drummer Jay Space and bassist Jono MOFO stir up some of the most ear-shattering sounds in rock music, fusing the furious industrial punk sound of Big Black with atmospheric post-punk, not to mention lots and lots of effects.

On the group’s second album, Exploding Head, A Place to Bury Strangers have paradoxically emerged with an album that’s more accessible and direct than their debut, while sounding even more menacing and just plain loud. Inspired by a friend’s band, Cobra Spa, Ackermann said the initial idea was to create the most extreme and intense rock record imaginable. Yet as the process went on, plans began to change.

“I’ve always wanted to make a record like that,” Ackermann said. “Just one of the craziest, most messed up albums we had ever heard. But that changed as we went along. We wrote 18 songs, and the crazy rockers, most of them didn’t make it. But it also grew better as an album that way.”

With songs like “Keep Slipping Away,” “In Your Heart” and the title track, Exploding Head contains some of the band’s most immediate work to date. The band has never shied away from hook-laden pop songs, as evident in 2007’s “To Fix The Gash In Your Head” and “I Know I’ll See You.” But this time around, the melodies sound just a bit crisper and more pronounced, something that Ackermann attributes to the production rather than how the songs were written.

“It’s more clear … you can hear more of everything than on the last record,” Ackermann said. “Some songs have a lot less guitar—you hear one guitar rather than 19 guitars. There’s more of a focus on the melody.”

Sticking with the theme of `total sonic annihilation,’ the name of the band’s new album, Exploding Head, seems to fit their noisy, destructive style of rock quite well. According to Ackermann, the title comes from a dark and stressful period in his life that weighed heavily on him, but it translated well to the song of the same name, and ultimately the album. But he also said that what the listener takes from it is more important than its origin.

“People often come up with their own meaning, but it also has its own imagery,” Ackermann said. “Usually your own imagination or experience is greater than the real story behind it.”

Most of Exploding Head was written after the band released their self-titled debut in 2007. However, two songs on the album, “Ego Death” and “I Lived My Life to Stand In the Shadow of Your Heart” have existed for a long time, having been live staples for several years. As Ackermann tells it, they were on the list of songs the band had wanted to record for a while and when it came time to sequence the album, just made sense in the context of the whole.

“(They were) just songs we had always planned on recording,” Ackermann said. “Time flies so quickly and we had never had the chance to record them. They were on the roster of songs I thought were badass, and they seemed to fit with everything we were doing on the album. Eventually when it came down to the flow of the album, they just worked really well.”

If there’s a common thread that runs through the songs on Exploding Head, it’s that each one of them is densely layered, distorted and, above all, intense. Yet, there are vast valleys between each song, as a track like “Lost Feeling” sounds ominous and droning, while “Deadbeat” is a straightforward rock `n’ roll song. The diversity in the group’s songs creates a strong, cohesive flow, but according to Ackermann, the paths toward creating those songs vary widely.

“The songs are all written in very different ways,” Ackermann said. “Playing with different effects pedals, I’ll come across something and I’ll think `awesome, let’s go with that.’ Or you’ll be at the movies, or walking down the street, and you’ll get a melody stuck in your head. It’s good to realize those moments and put those down as they happen.”

As founder of effects pedal company Death By Audio, Ackermann if often working on creating new sounds, not just for his own band, but for clients such as Wilco, Spoon and Lightning Bolt. That said, his interest in noise and effects is part of what keeps the sound of A Place to Bury Strangers unique.

“I think that’s always been really exciting to me,” Ackermann said. “Building your own effects pedals, you can get really intense sounds.

“Noise is beautiful. There’s always that mystery of how it comes out.”

Tags
A Place to Bury Strangers