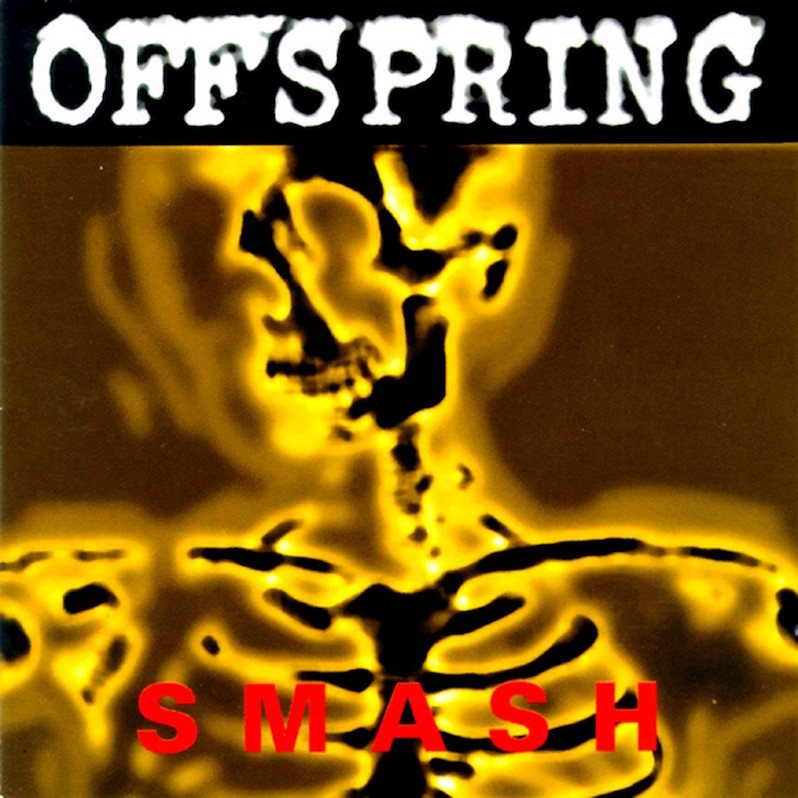 It sounds like a frat party gone bad. It’s a sonic equivalent to a bully mocking the general notions of song, harmony, melody. It’s perhaps the ugliest thing ever put to tape; it’s also one of the most iconic. Everyone can recognize the opening to The Offspring’s “Self Esteem,” the eighth track on 1994’s ultra-mega-hit album, Smash.

Despite not understanding, I knew that it was a taboo subject—and just one of the many taboo and scary implications Smash put in my little brain.

Between ‘94 and ‘95, I was developing musical interests outside of what my parents listened to, and I fell hard for punk. Dookie was my first favorite album, so I immediately fixated on everything that sounded similar. No Doubt, Rancid, Bad Religion. If it was loud and fast, I was in.

But Smash was different. Smash was scary. The image of a yellow skeleton x-ray that adorns the cover foretold of visceral assault. Imagine 10-year-old me presenting the album to my mom at Walmart, asking if she’d buy it for me. The vaguely procreative band name, the x-ray image, the album title that insinuates bodily harm—it wasn’t gonna happen. Never mind the fact that—in a last ditch effort—I tried to convince her that “Come Out And Play” inspired the song on the Refrigerator Raider commercial, a popular milk advertisement that my family loved. I don’t know if this is true, but it seemed uncannily close at the time, although listening to it now, the song feels more in-line with Ministry than The Offspring.

I would later buy the album, but on cassette because I couldn’t wait for another week’s worth of allowance to pay for the CD. And oh lord, the swears on that album! Growing up in a Mormon household, I had to quickly learn the art of screening the albums in private before ever playing any album at a volume my parents could hear. But after hearing the screamed, a cappella breakdown in the middle of “Bad Habit” (“You stupid, dumbshit, goddamn motherfucker!”), it was obvious I would never be able to play Smash whenever my parents were around. When my family watched them perform “Bad Habit” at the Billboard Music Awards in 1994 and there was a solid 10 seconds of dubbed-out silence, I pretended like I didn’t know what was going on.

But it wasn’t just their aesthetics that were scary. Smash was scary on a psychological level that few of The Offspring’s contemporaries were. Bad Religion wrote songs about intellectual devolution, Green Day’s songs dove into the consequences of having feelings, and Rancid documented the warts and blemishes of street life and punk culture. But The Offspring wrote about the ways the world could hurt you: road rage (“Bad Habit”), youth violence (“Come Out and Play”) and genocide (uh… “Genocide”). They instilled fear like Fox news or an ‘80s slasher movie: Fall out of line and you’ll get hurt. Their music was reactionary, not revolutionary, and also strangely moralistic. I don’t know whether running against traditional liberal punk ethos was The Offspring’s intention or not—it’s hard to know if Smash is serious, joking, subversive or all of the above—but that fear-mongering could could be a reason why the album hits so hard. Smash recognizes the righteousness of an angry, scared populace, and validates it.

The years since Smash came out have been very good to The Offspring, who’ve scored hit after hit (especially 1998’s Americana) and can still fill stadiums. It didn’t take long after Smash, however, for fame to smooth out The Offspring’s rough edges. Songs like “Pretty Fly (For A White Guy)” and the “Why Don’t You Get a Job” (a shameless rip-off of Ob-La-Di, Ob-La Da”) turned them into a novelty act—poppier than the most poppy pop-punk. It’s weird to think that I once thought they were so scary.

Twenty-five years later, it’s difficult to evaluate Smash without taking into consideration all that The Offspring has put out since, which has felt a little like a magician sloppily revealing their secrets. Which is to say that Smash—ostensibly The Offspring’s thesis statement—is a little dumb. It’s hard not to hear the folded-armed, Kids today!-didacticism of “Come Out and Play” as a precursor for “Pretty Fly (For a White Guy)” (it also doesn’t help that the gravel-voice saying “You gotta keep ‘em separated” sounds so similar to “Pretty Fly”’s “Gunter glieben glauten globen”). There’s something uncomfortable about “Self Esteem”—a song named for personal culpability but actually feels more like gaslighting and slut-shaming (they dug further into this on Americana’s collar-pull of a track “She’s Got Issues”). On the most basic level, listening to The Offspring try their hand at ska (“What Happened to You?”) is the equivalent of a skanking cringe. And it’s hard to reconcile closing the album with the refrain “I’m not a trendy asshole. Do what I want, do what I feel like!”

But dumb doesn’t necessarily mean bad. Frontman Dexter Holland is a smart dude with a Ph.D. in molecular biology and a pretty decent hot sauce company to boot, and his penchant for provocation seems way more self-aware than, say, that of NOFX. That is, Holland can still cater to the “edgy” anti-PC crowd, but is faster than most to throw his hands up and say “just kidding!” And make no mistake: Smash has some incredibly funny moments, like the overactive violence in “Bad Habit” or the line in “Self Esteem” about making dessert. But it all feels false, like a band playing punk, not being punk. There are rippers on Smash, none of which were radio hits (“Nitro (Youth Energy)” is undeniable), but for the most part, Smash sounds too winking. Too opportunistic. Too pleased with itself.