There were a lot of blank days, weeks, and months last year. There was a whole lot of nothing except fear and inertia—the feeling that there might not be a way out of this one this time. The music being made at the time skewed toward the introverted, and understandably so.

That low key dynamic made the rowdy nature of Militarie Gun’s first songs stand out even more than they might have under different circumstances. When “Dislocate Me” hit—two minutes and three seconds of serrated riffs and monster hooks—the idea of being out there in the world, screaming your heart out to a band that felt like it mattered, started to come into focus again.

Their debut EP My Life is Over landed in September 2020, six months ahead of Regional Justice Center’s latest powerviolence odyssey Crime and Punishment. The musician behind both projects, Ian Shelton, is a particular breed of DIY creator: he lives on the corner of can’t stop and won’t stop, funneling the sort of energy most of us can muster a couple of days in 30 into song after song after song.

Last spring, on the day a Regional Justice Center tour got pulled due to the pandemic, he began building Militarie Gun. The world stopped, and Ian Shelton got started. “I went to the practice space every single day, writing and demoing for at least four hours,” he recalls, reaching on the morning of a show in Boston midway through the band’s long-awaited first tour. “It became the only thing I had going in my life. I literally had nothing else. I never got over it. Maybe me getting out on tour for the first time is me getting over it.”

Shelton wrote every note and played almost every instrument on My Life is Over, but he has subsequently fleshed out Militarie Gun into a real-life band, with guitarists Nick Cogan and William Acuña (who did contribute Mellotron to those early recordings) playing off drummer Vince Nguyen and bassist Max Epstein. Swept along by the currents of his writing, they have since released the two part EP series All Roads Lead to the Gun and have their sights set on a February recording stint for their debut full-length album.

Shelton moves fast and is happy to cut ties—Militarie Gun provided a much-needed outlet at a hard time, but the songs are just songs to him. He is not precious about them. “​​I can view a song as disposable because I already have 20 more written,” he elaborates. “Eventually, by the time I release those songs I’ll have 20 more written and think that those are better than the ones being released. It’s this endless process of feeling as though I could do better, and have done better but nobody’s seen it yet. It’s honestly a layer of protection. If someone critiques me, I can always think, ‘OK, well it’s not as good as what I have that’s not out yet.’ That’s maybe a cop out. I don’t know.”

Each successive release has driven up expectations, with the band’s Guided By Voices-meets-Snapcase sound coalescing around tracks that have a firmer grasp on performance dynamics, particularly Shelton’s growing ease with fronting a band after years sitting behind a drum kit on stage. His gutsy bark is offset by moments of space and guitar jangle, cutting back against the grain of Regional Justice Center’s suffocating heaviness. They’re learning all the time.

“Ultimately, I’m down to leave it all behind for something better,” Shelton says. “That’s also the process of seeing the way an audience reacts to it, like maybe this song isn’t as good as I thought, or maybe this song just invokes a different reaction that I thought. Or there’s watching the way a song is streamed. A song we thought would be really popular is hands down our least popular. It’s interesting watching that process. But I just go ‘fuck it, I don’t care, throw it away.’”

Technology plays an interesting role in this always-on approach. From the outside it’s tempting to view Shelton as the sort of musician who’d have been a tape-trader’s dream 30 or 40 years ago, churning out weirdo, out of the way stuff on a four track. He closed out 2020 by releasing a demo cassette with S.W.A.T., where he recorded the instruments using nothing other than an iPhone 8, and platforms such as Bandcamp offer rapid-fire digital releases for people who can’t sit still. But in reality Shelton, who is also a prolific filmmaker, is driven by necessity rather than a desire to explore the avenues offered by tech company gadgets.

“Ease of creativity has been a huge factor, but the thing is that I’m technologically averse,” he admits. “I’m not good at working on a computer. I don’t have the patience for it. The iPhone demoing process is as primitive as it can get, and that’s why it works for me. It’s literally my phone as the microphone, the interface, the mixing, everything. I just have to point it where the sound is coming from and I can make something. If I have to set up mics and my computer it just becomes incredibly frustrating for me. I usually give up and dislike the process. I feel like I should spend more time and get to know it a little, but I would say I’m straight up primitive.”

Now on the road, Shelton is struggling to get his head adjusted to east coast time. He’s very much a west coast fixture, having bounced between the Bay Area, Seattle and Los Angeles either side of a formative time in Enumclaw, Washington, where he eventually found an outlet in hardcore. Baited and suspended at school, and unmoored at home as his parents lived with alcoholism, it was a Ceremony show that lifted the lid on the sort of emotional release that he’d been searching for. “That catharsis became an obsession,” he recently told Stereogum’s Mia Hughes. “That’s why I think I’m stuck making hardcore punk records at almost 30 years old.”

The crushing intensity of Regional Justice Center plays a specific role in this dynamic—detailing and interrogating the US prison system following the incarceration of Shelton’s brother, who was jailed in his late teens—but Militarie Gun offers a challenge to it. It asks whether or not melody can provide the same outlet and rush as aggression. “Hardcore, like hardcore hardcore, is not an everyday thing,” Shelton says.

“But when it’s time to scratch that itch I get stuck in that mode for quite some time. It speaks more to this animalistic, rhythmic part of my brain. My foreground brain, even since before RJC, has been more dedicated to melody. That’s why a thing like Guided By Voices has spoken to me so much. There is the rawness that comes with punk, but in this different form that is more expressive in every way.”

Ricocheting between these extremes in a condensed time frame, essentially daring the listener to gripe at the change in priorities, might once have earned Shelton brickbats from the punkest among us. He doesn’t care. “I hear about people having some sort of opinion about that,” he says. “But I truly believe those people to be boring, bland idiots if they actually believe that anyone only listens to one type of music, and can only play one type of music, and can only use their body and their voice in one way.

“I view everything as a possibility. I listen to a different style of music every day, and I don’t see a reason why I wouldn’t be able to play a different style every day of the week if I wanted to. That genre purism stuff is all made up around cool guy politics that are meant to disguise how uninteresting a lot of people within punk are. They can only play power chords. They only have a limited creative output. They then try to impose that on others so that they’re not exposed.”

The thing is, by the time you’ve had that thought and powered up that odd sense of ownership and indignation, Shelton’s probably moved on to something else. His drive is remarkable and possibly even debilitating in the long run, but it’s not something with an off switch. He’s down to focus his attention on Militarie Gun for the next couple of years—tours with Angel Du$t and Fiddlehead are incoming—but even then he says that he’s already writing for other projects. It’s down to us to keep up.

“I just don’t have another way to do it,” he says. “I wish I would not be obsessive about these things, but I am. No matter how hard I try to have a day where I don’t touch or do anything related to it, I find myself unable to. But I never think about the work once it’s released. I think, ‘I have this written, here’s the next thing I want to write, and here’s the thing after that.’ I’m thinking on all those things all the time, the way that one could lead into the next. I’m never thinking about ‘the work’. It’s done.” 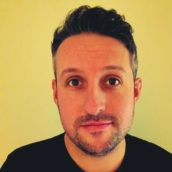