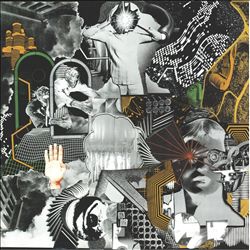 By nature, ambient music largely avoids being cluttered or busy. It’s meant to convey mood, or to put the listener in a certain headspace — it consumes rather than provokes. This is not to say that there are not exceptions, of course. Aphex Twin, for one, has indulged in his share of sensory explosions, and the alternately provocative and meditative Oneohtrix Point Never launched his 2010 album Returnal by needling his listeners with a menacing noisecopter titled “Nil Admirari.” St. Louis producer Joseph Raglani is not quite so antagonistic, nor do his methods result in any number of ad hoc identities a la Richard James. But on Real Colors of the Physical World, there sure is a hell of a lot going on.

Structured into two 20-plus minute epic pieces and two shorter, five-minute tracks, Real Colors of the Physical World on paper lays out a bit like Godspeed You! Black Emperor’s recent Allelujah! Don’t Bend! Ascend!, though its sonic makeup is something else entirely. Raglani is a singularly strange and frequently confounding artist, and while his compositions are accessible in their own way, they demand rapt attention, test patience and reward endurance. By only the halfway mark of the sprawling “Fog of Interruption,” Raglani has gone from electronic belches to cosmic float, back to near silence and into tempo-shifting space flutter. Overwhelming, to say the least.

By comparison, “Terrain of Antiquity,” the album’s other lengthy odyssey, begins to launch considerably more ideas at once, though they seem to work a little more strongly in unison. It’s melodic, even kinda grooving, but it’s also temporary. And then come a barrage of electronic darts, heavenly mist, 8-bit pulses and ultimately a slow fade. “Terrain” and “Fog,” while consuming 80 percent of the album, are oddly disconnected from Raglani’s shorter pieces however. These tracks — “The Exploded View” and “Trampoline Dream” — might as well be the work of an entirely separate artist, on an entirely separate album. They’re lighter, prettier, more conventionally accessible. In fact, they’re essentially pop songs, and quite wonderful ones at that, brimming with the brilliant neon glow of Harmonia, Neu! and Kraftwerk, shades of which much of the best progressive electronic music often carry if not quite so directly.

This balance of two such disparate sides of Raglani’s identity make the trip through Real Colors of the Physical World all the more disorienting, though it’s a good sort of confusion. Good albums need not be “figured out” in order to be enjoyable — frankly to do so seems too much of a chore to be worth the enjoyment in some cases. But with Raglani, the fog he stirs up is best to get lost in. It’s playfully strange and willfully difficult, but by no means antagonistic. The chaos takes a while to make sense, and even then, only a little, but the myriad moments of sublimity that occur throughout ultimately render any quest for sense completely arbitrary.