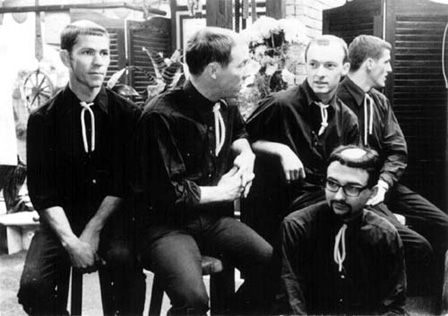 The Monks formed in 1964 in Germany — originally under the name The Torquays — when all five members were stationed there while serving in the Army. After being discharged, they began touring, and adopted a monastic image (black robes with white ropes as neckwear, and tonsures) that was thought up by a German marketing company, according to Minneapolis City Pages.

The group only released one proper full-length album during their career — 1966’s Black Monk Time — but it became a cult favorite over the years, thanks to its weird, psychedelic sound, unusual arrangements (they used banjo in addition to guitar), and good-humored yet raucous tunes like “Monk Time,” “Oh How to Do Now” and “Complication.” On “Monk Time,” Burger introduces himself and the band in a legendarily manic narration: “Alright, my name’s Gary! Let’s go, it’s beat time, it’s hop time, it’s monk time!”

Monks reunited in 1999 for a brief period, and in 2009, Light In the Attic reissued Black Monk Time, in addition to releasing a compilation of their early songs. In 2006, Burger was elected mayor of Turtle River, Minnesota, a town with a population of 75.