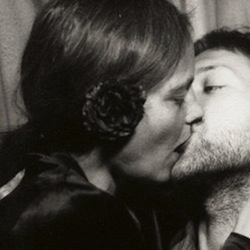 It seems, as of late, there’s been a severe shortage of prominent female vocalists imbuing their music with a sense of passionate, white-hot anger. That’s not to discredit the sugar-sweet harmonies of admittedly excellent artists such as Jessie Ware and sister trio HAIM, but even the most challenging of their material doesn’t touch the drive and intensity of Scout Niblett’s. And that translates to covers: Her cover of TLC’s seminal 1999 hit “No Scrubs” (Seriously, this happens, and it’s kind of awesome) is filled with enough of Niblett’s trademark murmured vocals and murky grunge throwback guitar to evoke simultaneous pain and pleasure.

The same goes for It’s Up to Emma, Niblett’s seventh album and second for Drag City. Niblett primarily sticks to sparse arrangements, and largely to great effect. Large parts of songs will be filled with either a simple guitar — played with such intensity you can almost imagine Niblett’s fingertips raw from friction, and a look of deep concentration on her face — or her gentle yet commanding voice filling the silence. The two will meet, slowly, carefully, before finally building up to a glorious climax, guitars fully wailing, a cacophony of drums, the whole shebang. You may know when it’s coming, but that doesn’t make it any less wonderful.

The only downside to this structure is that it’s used regularly throughout the album, and it gradually becomes a little tiresome to play “guess when the drums are going to kick in.” The trouble really is that Niblett previously perfected this technique on “Kiss,” the breathtaking love song from 2007’s This Fool Can Die Now, and few songs on this album come close to the soaring heights of that song. However, “What Can I Do?”, the album’s final track, is definitely a close second, albeit somewhat tighter and more restrained (which some could argue as a sign of the artist’s maturing songwriting style).

Regardless of a feeling of repetition in her work, it’s a shame that Scout Niblett’s music hasn’t graced the ears of more listeners. Her individual vocal sound and grungy instrumentation (she cites Mudhoney, Nirvana and Hole as inspirations) should surely make her heir to the thrones of PJ Harvey and Courtney Love, yet she remains relatively unknown. While It’s Up to Emma may not be a new personal best for Niblett, it’s nonetheless a showcase for the singer/songwriter’s unique talents.

Cat Power – You Are Free