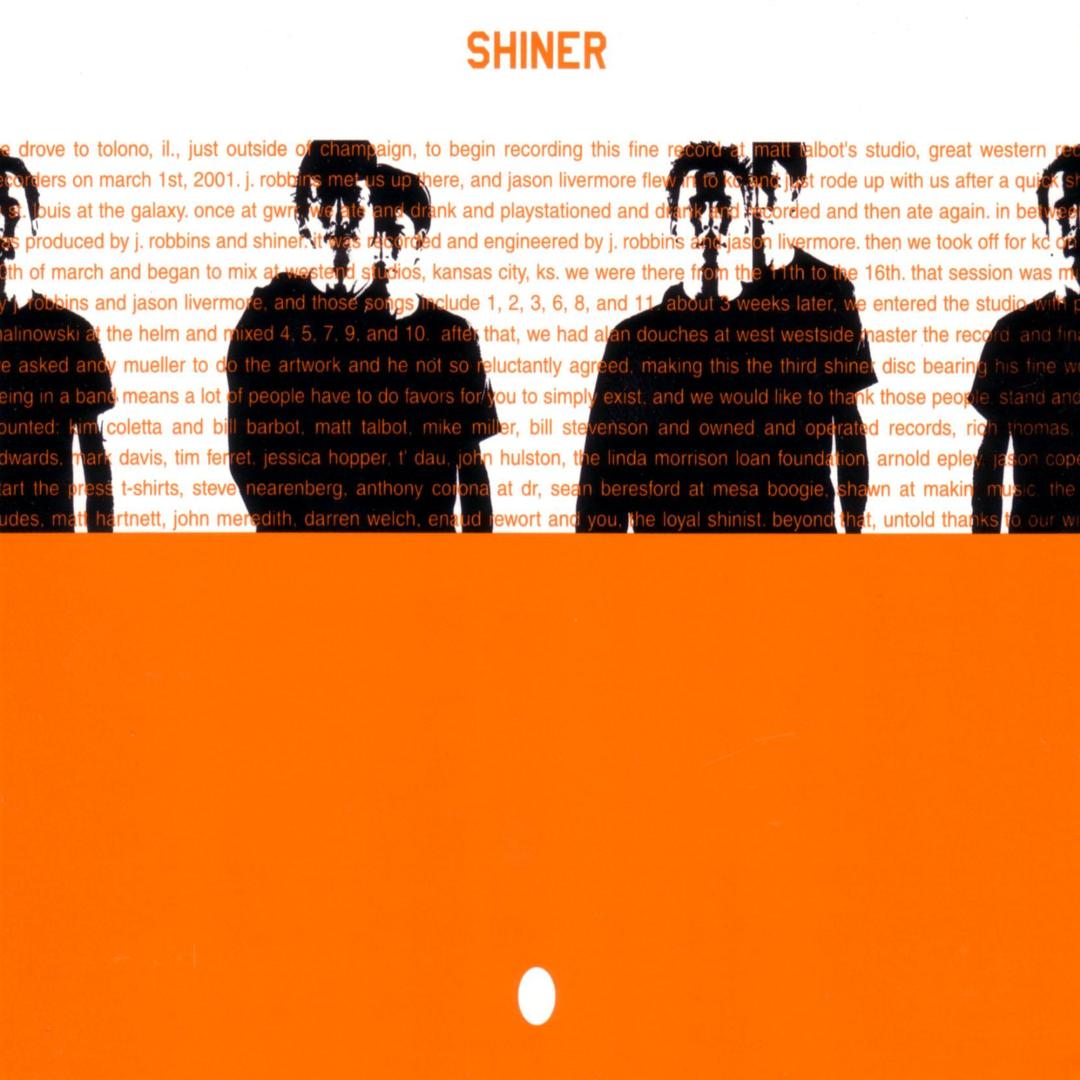 An album isn’t always born with a song, but with a sound. A tone. A noise. One click of an effects pedal can open the gateway to new directions in sound, ones discovered sometimes by accident or through deliberate acts of discovery rather than of structure and order.

Before they began writing any proper songs for their 2001-released final album, The Egg, Kansas City’s Shiner were pursuing that sound, or rather the idea of a sound. “There were definitely noises that we wanted to hear,” says guitarist Josh Newton, reflecting on the origins of the band’s swan song. And in some ways, Shiner made a career out of pursuing those noises. While their first two albums, 1996’s Splay and 1997’s Lula Divinia, were more controlled displays of guitar-driven rock music, their use of rhythm, texture and chord structure were well outside the mainstream. And 2000’s Starless, released on the ALL-founded Owned & Operated Records, incorporated a broader array of instrumental textures and production techniques, which injected a sense of art rock majesty into the band’s punchy post-hardcore sound. It wasn’t quite their “sell-out record,” as Newton says it was received at one time, but it brought about some dramatic change.

The Egg showed just how far Shiner could take their most experimental instincts if they followed them as far as they’d go. Yet it doesn’t quite feel right to regard The Egg as “experimental.” When held to the standards of the albums Shiner released before it, the album feels bigger, more exploratory and maximalist. And yet it has the distinction of featuring some of the best genuine rock songs that Newton, guitarist/vocalist Allen Epley, drummer Jason Gerken and bassist Paul Malinowsky ever wrote, from the psychedelic grooves of “Pills” to the thunderous climax of the title track and the heavy, distorted scrape of “Play Dead.” Yet there’s a greater degree of progressive-rock sprawl, with songs like “The Simple Truth” sprawling out to just under eight minutes, complete with a spacious, ambient interlude sandwiched into the middle. And “Bells and Whistles,” while ostensibly a pop song, ends with some cosmic guitar melt.

For Shiner, The Egg was an opportunity to step outside of their comfort zone, which Newton says, in part, was influenced by a lot of what was in their headphones at the time.

“Due to listening to OK Computer and Kid A and all that stuff, it was definitely in our minds to not just do the same rock songs, and to get away from ourselves and see where it would go,” he says. “Do things that maybe didn’t come naturally and make things more interesting for ourselves, really. I think adding a fourth member definitely gave the option for more sounds and different textures versus…the first two are more straight-ahead guitar-rock records. Not that we weren’t still using guitars, but everyone was using a lot of effects. It’s like the joke about Cave In discovering effects before they recorded Jupiter. I always tended to be a sound effects abuser kind of guy. To use effects for not-so-subtle things.”

At the time, The Egg came across as Shiner’s most accessible album. It still does, though it’s also perhaps their weirdest. For a band that began making relatively straightforward, noisy indie rock, they evolved into a band with larger ambitions and loftier goals within their sights. Not just musically, but career-wise—after floating around from one independent label to another for their first three albums, Shiner began to shop The Egg to labels with bigger resources, seeking out the kind of audience and platform growth that matched their musical ambitions. In fact, there’s an alternate timeline where they might be the ones playing Coachella alongside the likes of Refused and Drive Like Jehu, had history’s course gone slightly differently.

“The Egg was primarily written with no label,” Newton says. “We were talking to Grand Royal at the time. And they had just sunk a shit ton of money into At the Drive-In, who then broke up. So that kind of ended the label. And there went our hopes of rock stardom.

“We were talking to labels who said ‘yeah, this is cool, but we don’t know how to sell it,’” he adds, “which bummed us out at the time, but in hindsight, I get it.”

Washington, D.C.-based deSoto Records, run by former Jawbox bassist Kim Coletta, released the album, which brought things full circle for Shiner. Their 1996 debut was also released by deSoto, and the Jawbox family were good friends of the band—Shiner had even toured with Jawbox and offshoot band Burning Airlines. By most measures it was the right fit—friends working with friends. Yet the obstacles that the band kept running into eventually led them to a kind of existential crisis, leading them to question whether or not it was worth continuing as a band if there wasn’t much room for growth ahead of them.

“I think we thought this was the one that made people understand us more, and would get us bigger tours,” Newton says. “And it ended up just being more of us having to headline because nobody wanted to take us out. I guess it was during the touring of this where we were like ‘what are we doing?’ We toured a lot back then, and we were pretty burnt on being around each other. We all wanted to play music with other people. A lot of bickering from being together too much. Resenting not being more appreciated. I kind of feel stupid saying that, but ultimately that’s what it was.”

Shiner broke up in 2003 after more than a year of touring behind The Egg. Their story was by no means an unusual one; they simply ran their course, building up a cult fanbase in a decade of releasing music, and reaching the logical endpoint of that arc. Epley formed The Life and Times shortly after the band’s breakup, while the other members did touring stints in a number of bands, as well as other industry work. Yet a funny thing tends to happen when an album is left alone for several years. As file-sharing and social media grew in the time after The Egg was released, so did its stature, and eventually the question arose of whether or not Shiner would ever allow it a second life on vinyl, which eventually led to two separate pressings and some new shows. And, most importantly, a renewed sense of appreciation for the band.

“I was a guitar tech for Fall Out Boy, and the guitar player that I worked for, Joe Troman, was asking me when or if the Shiner records ever got put out on vinyl,” Newton says. “And I was like ‘nah, vinyl wasn’t really a thing then’. So he said ‘That’s ridiculous. Let’s do vinyl!’ I think he just wanted a vinyl copy for himself. So we got the masters together and figured it all out. So if we put it out, we figured we’d play some shows.

“Once we did that it was fun again, because it didn’t matter,” he adds. “We weren’t trying to make it. There were no consequences. It was just ‘Let’s have fun.'”