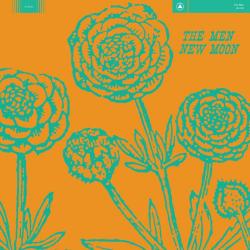 Forget everything you knew about The Men. Or, better yet, forget about half of what you know about The Men. More importantly, the elements of the band most prominently displayed on 2011’s Leave Home — the screeching distortion, the unhinged ferocity, the sense that all hell could break out at any moment — are more or less packed up into storage. All that stuff was fun, and had its time and place, but the band has moved on and doesn’t appear interested in circling back around again. The Men still rock, of course, and 2012’s Open Your Heart was at least as loud as its predecessor, if not quite as uncompromisingly aggressive. But when the band openly cites influences like Leo Kottke and Bob Dylan’s Street Legal, there’s a sense those raucous punk days are likely never to return.

But you know what? That’s perfectly fine. The Men have a new agenda, namely being simply a great rock ‘n’ roll band, no hyphens necessary, and with fourth album New Moon, they continue on a path toward the raucous Americana tradition begun with Neil Young and Crazy Horse and relayed to Dinosaur Jr. New Moon is steeped in folk and cowpunk, and the band has seemingly dusted off their boots and denim this time around, shit-kicking their way to one hell of a hootenanny.

The band makes no attempt to ease the listener into their newfound country-fried approach, instead dropping straight into the saloon piano and acoustic plucks of first track “Open the Door,” which opens with the folksy couplet, “won’t you slip on by my side/drive through the countryside.” It’s downright charming — to think, this fiery, chaotic punk band has slowed down and found a slower pace of life, and slower tempo of music, to be just their speed. Only it’s not that simple; just one track later, on “Half Angel Half Light,” the group erupts into one of the strongest rockers they’ve ever written. It has a tinge of twang to it, sure, but it still rips.

This push and pull between brief bursts of furious rock music and folkier chugs goes on throughout the entirety of New Moon, though they never much seem at odds with each other. Almost all of the rockers carry a touch of earthy roots rock, whether it’s the heavy use of harmonica in “Without a Face,” the dusty Crazy Horse stomp of “I Saw Her Face,” the slide solos in “I See No One.” And the more explicitly country-influenced tracks, like the strummy “The Seeds” or the jaunty, organ-fueled “Bird Song,” are, themselves, still bursting with the grit and energy of a band whose punk rock roots will never completely disappear. So maybe that storage locker is left unlocked, or even overflowing into a hall closet. Regardless of how many acoustic guitars or harmonicas The Men pack into New Moon, the album proves one thing — you can take the band out of punk rock, but you can’t take punk rock out of the band.