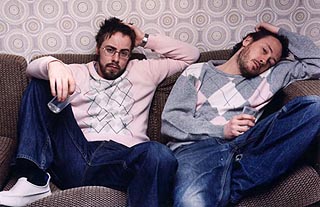 I’ve been told that as you get older, among other things, your tastes become more refined, your ability to concentrate more focused, and your holdings at the bank grow larger, eventually to the extent that you actually make use of a savings account.

I’m not sure if it’s good or bad that my aging process seems to be going in the opposite direction so far; my tastes have become more expansive, encompassing things I used to shun on principle (blockbusters, reggae, being conscious of how I look, to name a few), my attention span has adapted to the streets of Manhattan, which demand immediate concentration upon the nearest spectacle, only to be replaced by another a few seconds later, while my funds have perversely NOT adapted to Manhattan, which demands immediate concentration of large sums which require replenishing a few seconds later.

Hence the idea behind this column – even if I could afford to buy an album, it’s likely I don’t have the patience to listen to the whole thing from start to finish, much less review it. I can further justify the idea of a one-song review (and therefore diminish the nagging suspicion that I’m just being lazy) by asking you to think about how many albums are really, really good all the way through. As in – every single track is exceptionally good.

There aren’t very many.

That’s why I’d like to be among the first to praise the relatively new iTunes music store (Apple is not paying me; I wish they were). Free previews and ninety-nine cent song downloads: perfect for the aging, metropolitan music fan.

Anyway, on to the first song.

As hard as I try, I cannot think of any other song that sounds quite like this one.

In the gurgle that prefaces its polished chrome vocal, the metallic tings that punctuate its relentless forward motion, the angelic rush of warbled voices grunting sexual ah-ah-ahs that climax in the acceleration of some antiquated factory grinding machine, “Hot & Cold” is a pumping piston of sonic auto-erotica.

Its strictly-metered beat machine and supersexy vocal keep the more adventurous sounds grounded, allowing it to straddle a fine line between danceclub booty-grind and industrial freak-out. Postmodern to the core, Basement Jaxx even manage to comment on this high-wire act in the song’s lyric: “Now I hear you talking some nonsense / and I know it’s peripheral and completely missable / but nicer than silence / and the odd siren that would otherwise be all I hear.”

Which is exactly the case when you think about it – you wouldn’t listen to this track for its lyrical evocation of a “wet and warm” place so much as the syncopated boops and baps – the “odd sirens” – that make it sound hot and cold.