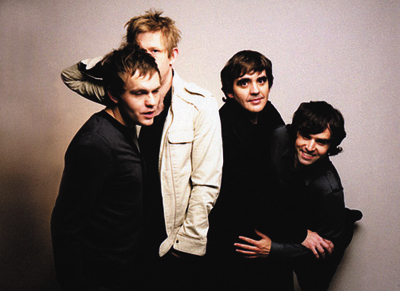 A few weeks ago, while spending time at home with my girlfriend, I hyperbolically blurted out that I had decided that Spoon was the best band in the world. I’m sure if I were to really examine every record I owned, every record I ever loved, I could more accurately determine the most deserving of the title. It could be The Beatles, or The Smiths, or The Pixies, or whatever, but that doesn’t really matter. I was merely making a passionate statement because it felt right at the time. Yet the more I think about it, I seem to believe it that much more. I’m hard pressed to think of a more consistently amazing band currently recording and performing today. TV on the Radio, The Decemberists, The National, Animal Collective-—they’ve all got impressive track records as well. With Spoon, though, they’ve got the numbers to back them up. I dare anyone to name one band that has released as many essential albums in the last decade as Spoon has, and if you’re counting, they’ve released five of them.

When my brother wrote his own Truly Great tribute on Depeche Mode, he remarked that he couldn’t remember which of their songs he had heard first. I would probably run into the same memory lapse with most bands, but I distinctly remember my introduction to Spoon, having first heard the stunning “Don’t Buy the Realistic” on 1997’s budget priced What’s Up Matador? compilation. It took a few listens to truly let it sink in, and even then, my high school earnings kept me from purchasing as many albums as I would have liked, thus keeping Telephono from being an immediate must have. Nonetheless, “Realistic” was a hell of a way to be introduced to a band, its slow building, dense structure washing over me, awash in distortion and static, something like The Pixies playing My Bloody Valentine. The album itself was merely good, old fashioned American indie rock, loud, a little sloppy, and a lot of fun, which prompted Elektra to take interest and subsequently sign the group.

With major label backing, Spoon then released A Series of Sneaks, an album which found the group a bit more refined, a bit tighter, but rocking just as hard as they had on their Matador debut. Sneaks would eventually become a fan favorite and a cult classic, many even compelled to designate it as the band’s strongest effort. At the time, however, it wasn’t the commercial success that Elektra had hoped, nor was it critically lauded (I remember reading a lukewarm review in CMJ upon its release), and the band would soon find itself without a label. Disappointed, embittered, but soldiering on all the same, Britt Daniel, Jim Eno & Co. released a single on Omaha-based Saddle Creek titled “The Agony of Laffitte,” in which Daniel lashes out against Elektra A&R person Ron Laffitte with lines like “it’s like I knew two of you man/ the one before and after we shook hands,” and at the chorus, asking “are you ever honest with anyone?” Laffitte was fired around the time of Spoon’s release, incidentally enough.

In the years following A Series of Sneaks, Spoon had been working on third album, Girls Can Tell, my personal favorite and a drastic change in sound for the band. Yet, without a label, finding an avenue through which to release the album became difficult. After several months of frustration, the band finally found favor with Merge Records, who would then put out their next three records. Girls Can Tell made more of an impact on me than my first listen to Spoon, in that it felt like hearing an entirely new band. Everything I assumed had been wrong, and everything I thought I knew had been turned completely on its head. From rockers like “Take a Walk” to soul-baring groovers such as “Everything Hits At Once,” Girls Can Tell showed a new side of Spoon, one making sleek and sophisticated records, without any compromise. Album number four, Kill The Moonlight, sustained the critical praise of Girls and reinforced to me just how powerful a band they were, particularly given the level of restraint used in each song. Tracks like “Small Stakes” and “Jonathan Fisk” aren’t particularly fussy or elaborate, but their stark essence is what makes each of them so stunning. And for what it’s worth, “The Way We Get By” is still the single of the decade.

Spoon’s popularity had increased significantly with their third and fourth albums, and by the time Gimme Fiction was released, they were highly regarded rock `n’ roll heavyweights. Their funky single “I Turn My Camera On” had become a radio hit, and yielded an entertaining video featuring several pairs of legs and high heels. Hott. The rest of the album was a diverse and majestic array of songs, ranging from the tense, crashing “My Mathematical Mind” to the power pop of “Sister Jack” and the krautrock funk of “Was It You?” A bigger and more elaborate record than anything they had done before, Gimme Fiction had cemented Spoon as one of the most vital bands of the decade.

This week will see the release of the band’s sixth album, Ga Ga Ga Ga Ga. Admittedly, I would have forgiven them had they phoned it in, and I could have accepted an album that was less than spectacular. But that’s just not Spoon’s style. It’s yet another highlight in a nearly flawless series of albums, a definite `best of year’ contender, and further evidence of my theory that they’re the best band in the world. Other groups may have more dazzle, and some may have more legendary, mythical albums under their belt. There are certainly those who have received more media attention, but there are few albums today who have as consistent a record of releasing awesome, sometimes perfect, rock `n’ roll records.