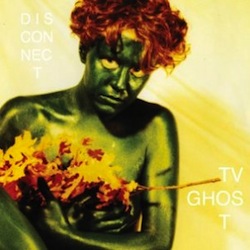 In the beginning, Lafayette, Indiana’s TV Ghost carved a path as a noisier band. Scratching out twisted psychedelic punk through an industrial filter, the band made synth- and guitar-based post-punk a platform for aggressive, antagonistic dissonance and visceral horror. Names like The Cramps, The Birthday Party and Pere Ubu have been thrown around with regard to their sonic makeup, and that’s not a bad starting point, if you add a much heavier layer of distortion to any of them. Amid TV Ghost’s hypnotic hostility, though, there were strong melodies and compelling creative twists on albums like 2009’s Cold Fish and 2011’s Mass Dream. Were TV Ghost to choose to shed some of that eardrum-puncturing high-end and intense load of static, they very well could have turned out some great pop songs, albeit darkly atmospheric ones.

The thought of making a more strongly accessible, song based album must have also occurred to TV Ghost in the last couple years, however. Over time, their lo-fi shrieks have given way to a headier shoegaze sound that puts the band’s melodic sensibility at the forefront. And if there were ever any suspicions that TV Ghost were, in fact, even better songwriters than noisemakers, new album Disconnect confirms it. Their textures are no longer quite so ugly, their production no longer as piercing. And, most importantly, their hooks are sharpened and more pronounced than ever.

Because the approach is less openly discordant, however, does not mean that the edge has dulled on TV Ghost’s sound. On Disconnect, it’s merely been reshaped in the form of an eerie, gothic chill rather than a brutal physicality. That the band has kept a certain sense of unnerving atmosphere makes Disconnect all the more enticing. Anybody can make a lot of noise or layer on the effects, but it takes a bit more creativity to find more depth by stripping some of them away. A track like “Veils,” for instance, evokes a strangely ominous tone through repetitious krautrock rhythms and some well executed feedback hums. For his part, vocalist Timothy Gick only deepens the creep factor with his monotone reading, which he juxtaposes against a more dramatic croon on the epic “Stranger.”

On Disconnect’s most impressive tracks, the band is now using their textural approach to enhance mood, as they do on “Dread Park,” a cinematically arranged dream-pop dirge in which guitars mimic strings and create cavernous sonic cathedrals. Even better still is a track like “Others Will Be Born,” in which a hypnotic, compulsive groove combines with interlocking parts of chilling ambience and subtle hooks. There’s still plenty of noise and distortion on the album, but more than ever TV Ghost are using it with an impressive level of restraint. Not that Disconnect would in any way be considered a simplification; TV Ghost are simply showing us the sonic delights that lie underneath their distorted veil