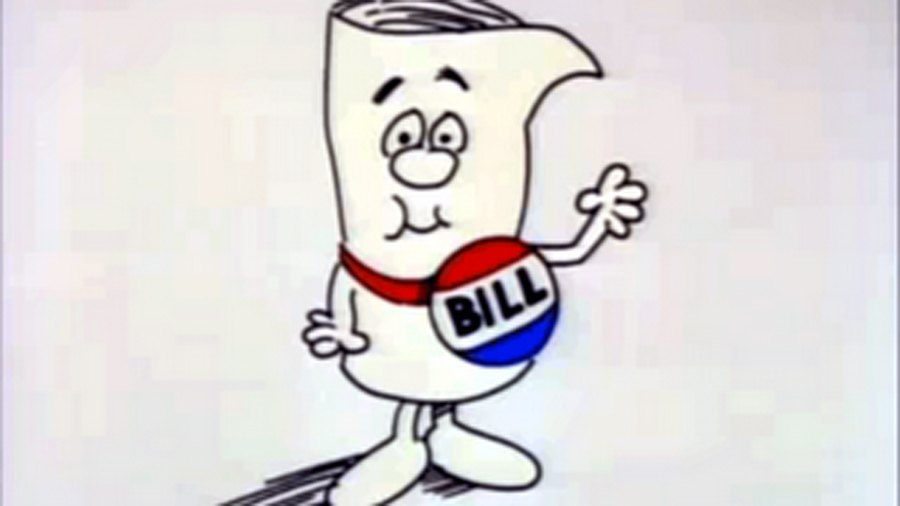 This is the third in our four-part series sating our curiosity about great collections of cover songs. In our matrix of sources and performers, we’ve already addressed albums where a single artist covers the work of one artist as well as many artists. Here we delve into releases where multiple performers cover multiple performers. Of the four lists we’re generating, this one might have been the most difficult to assemble. For one thing, these seem to be a relatively modern conceit—only one of these particular covers albums was released before the 1990s. For another thing, we noticed that many of the titles we considered could be sorted into only a few specific bins: special soundtracks, record label anniversary commemoratives, genre-on-genre crime (like Fearless Records’ “Punk Goes” series), charitable fundraisers, piecemeal collections from larger sources (like BBC Radio 1’s Live Lounge show), or—no lie—albums you could buy alongside your chai latte at Starbucks. Those are serious limiting factors, so some of what we researched was always going to sound at least a little contrived. We soldiered on nevertheless, and now present to you 10 great sets of artists paying homage en masse to the music of many of their peers and influences. 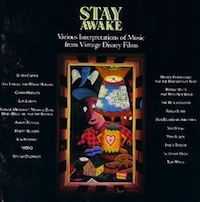 Producer Hal Willner more or less kicked off the V/A-tribute trend with Lost In the Stars: The Music of Kurt Weill, a lovably schizo ’85 album that slammed classicism up against modern rock and let them sort out the ashes. (Tom Waits brought the urns.) Stay Awake was his next project, and while stylistic clashes were still on the table there’s a chimerical cadence that flows underneath. Tweaking with boomers’ very sentimentalized nostalgia of Disney movies was just too good of an opportunity, yet Willner respects the source material just enough. Largely arranged as a series of suites, Stay Awake knows when not to mess with a good dream (Bonnie Raitt’s “Baby Mine,” Los Lobos’ “I Wan’na Be Like You”), when to add just a minimal edge (Yma Sumac’s “I Wonder,” the Replacements’ “Cruella de Ville”), and how to trust Waits with an after-hours session, a fractured memory and dented fenders (“Heigh-Ho”). Special bonus: spoken-word legend Ken Nordine in two songs, just to remind you childhood is a terrifyingly innocent time. – PP 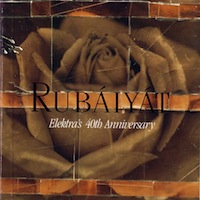 Rubáiyát is an impressive, monolithic 2-disc (or 2-cassette if that was still your thing in 1990) set that accomplished a twin miracle: making a strong case for the storied legacy and occasional batshit craziness of Elektra/Asylum. Lenny Kaye, who had produced the keystone compilation Nuggets, amassed artists from the labels’ rosters of the time to cover songs from Elektra’s history. The artistic choices were a revelation: Who would have imagined Howard Jones handling folk-pop classicist David Ackles’ “Road To Cairo,” or Ernie Isley ransacking the Cars’ “Let’s Go” (my favorite thing on the entire set – it’s like Ernie misheard the instructions as “let’s go crash a car”). Kaye’s loose and fast grip made for some wonderful, head-scratching moments like the Black Velvet Band screwing up the words to “Werewolves of London.” The impeccably clear production makes it sound like a drunken game of Texas hold ‘em being played at the Louvre. If you can find this you’ll hear at least one song from your favorite Elektralite that’s weirder than anything else they ever did (Billy Bragg doing Love’s “7 And 7 Is”) and some genuinely touching surprises (The Cure’s cover of “Hello I Love You”). Disappointingly, nobody tried a Bread song. – PP 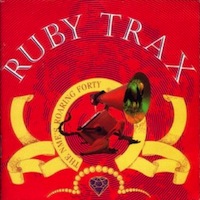 To celebrate 40 years of publication (a ruby anniversary, hence the title) and to raise money for services for the disabled, British music weekly New Musical Express released a 40-song, three-disc set of UK #1 singles covered by artists of the day. Picking just two score songs from across four decades of eclectic British musical tastes promised listeners a stylistic rollercoaster, and the results do not disappoint. There are plenty of performances which are surprisingly faithful (Boy George’s “My Sweet Lord,” Teenage Fanclub’s “Mr. Tambourine Man”), but more than enough are so far afield (Jesus Jones’ “Voodoo Chile,” Ned’s Atomic Dustbin’s “I’ve Never Been to Me“) as to be almost unrecognizable. Now add more than two additional decades of sonic patina, hearing these musicians from the start of Madchester and the rise of modern alternative radio—Tori Amos, EMF, World Party, Curve—and Ruby Trax becomes that much more of a mad and curious affair. – AB 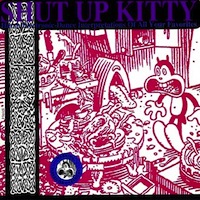 Right out of the gate — with a lurching KMFDM adaptation of U2’s classic “Mysterious Ways” — the listener knows exactly what they’re getting into on Shut Up Kitty. On this compilation, a steady rotation of ‘90s industrial mainstays dig through the pop/rock radio vaults to take on the challenge of finding classic tunes and seeing just how unrecognizable they can make them. Sure, there are moments — like Clay People’s take on Black Sabbath’s “Paranoid” — that pay homage to industrial’s spiritual predecessors. But, for the most part, Shut Up Kitty is industrial camp at its finest. There’s plenty of out-there electronica madness to be had on this record. Weirdest moment? Definitely Fleshhouse’s gothic, dirge-like take on “Good Vibrations.” – AK 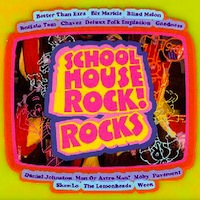 Tribute albums bloomed as part of the trend of instant nostalgia that began in the 1990s, attempting to revisit and decode the importance of pop culture of the very recent—maybe too recent—past. At this time, people of a certain age had grown up watching Saturday morning cartoons that no doubt included Schoolhouse Rock!, ABC’s musical animated shorts that were to basic topics in English, math, social studies, and science what Sesame Street was to letters, numbers, and feelings. To raise money for the Children’s Defense Fund, indie rockers and a few rappers came together to honor the jingles and characters that snuck some learning into their weekends. Pavement (“No More Kings”) and Chavez (“Little Twelvetoes”) went cracked and psychedelic; Moby (“Verb: That’s What’s Happening”), Biz Markie (“Energy Blues”), and Man or Astro-man? (“Interplanet Janet”) put a new spring in their songs’ steps. But “Three is the Magic Number” is this compilation’s centerpiece, a giddy and beautiful rendition of the number’s meanings and multiples capping the career of Blind Melon and their late frontman Shannon Hoon. – AB 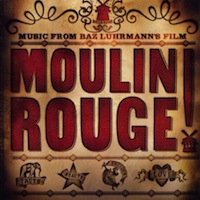 In typical Baz Luhrmann style, the soundtrack for Moulin Rouge is scattered, psychedelic, and epically beautiful all at once. From David Bowie covering “Nature Boy” to Beck doing Bowie’s “Diamond Dogs,” the melange is anything but predictable. On the grandest scale, we’re treated with delicious covers featuring big name artists like Bono on a huge rendition of T. Rex’s “Children of the Revolution,” and Pink, Lil’ Kim, and Christina Aguilera on a grindier version of Labelle’s “Lady Marmalade.” On a narrower front, Nicole Kidman, Ewan McGregor, and Jim Broadbent tackle the sappier moments. Moulin Rouge breaks the mold for musical soundtracks by giving us both classic songs interpreted by major players in the current music scene plus a cast recording. Some may laugh at these interludes, but I’d like to know who the hell expected the likes of McGregor to have such an insane set of pipes on him? Luckily, he stands up to the likes of Beck and Bowie as he covers Elton John’s “Your Song.” In fact, I never liked “Your Song” until I heard it in Moulin Rouge. – NG 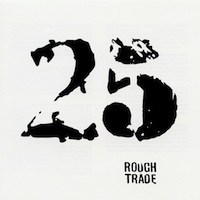 Rough Trade: Stop Me If You Think You’ve Heard This One Before
(2003; Rough Trade)

When UK-based Rough Trade records turned 25, it issued a selection of covers from its back catalog handled by modern acts of 2003. The Hidden Cameras, British Sea Power, Belle and Sebastian, The Veils — you get the picture. While the majority of the tracks covered here are fine selections from the British indie-underground scene, some rock while others languish, which is bound to happen on any album devoted solely to covers. Highlights you shouldn’t miss include Eastern Lane romping through the Feelies’ two minute “Fa Ce La,” Scotland’s Aztec Camera’s “We Could Send Letters” beautifully covered by Mystic Chords of Memory, and a sunny Belle and Sebastian rendition of “Final Day” from the short-lived Young Marble Giants. Make sure to catch Royal City and The Detroit Cobras offering up their reliable, intriguing interpretations of two classic Strokes’ tracks “Is This It” and “Last Nite.” Depending on taste and exposure to the original versions, the entire project has the potential to broaden anyone’s grasp on the existing cache of 1980s indie British music thanks to Rough Trade’s work so long ago. – NG 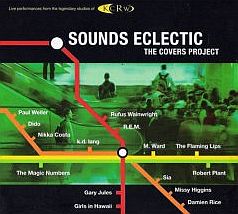 If you didn’t discover M. Ward just by chance like most of us did (2006’s Post-War was kind of a favorite), KRCW’s Sounds Eclectic: Covers Project might have been your initial introduction to the Portland singer/songwriter with his slow version of “Let’s Dance,” perhaps one of the finest Bowie covers of all time. Recorded over a span of five years at the KCRW studio as part of their long-running Morning Becomes Eclectic, the tracks on Covers Project mainly features slowed down, acoustic versions of classic tunes indulged in by some well-known artists. From the Gary Jules take on Tears for Fears’ “Mad World” which appeared on the Donnie Darko soundtrack, to Flaming Lips doing Radiohead’s “Knives Out,” as well as a “cover” of Zeppelin’s “Black Dog” by Robert Plant. Despite some weak moments, the chance to catch interpretations of “Creep” by Damien Rice and “Hallelujah” by K.D. Lang redeem those sleeper tunes that fail to capture some new and interesting aspect of the original. – NG 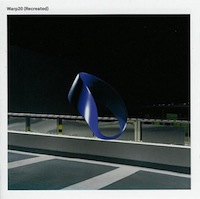 Much of the music released on UK-based Warp Records is, well, warped in some nature or another. But, outside of that subtle qualifier, the label has a pretty wide palette; covering the spectrum with artists as varied in style as Aphex Twin, Grizzly Bear, Battles, Boards of Canada and Clark. So it’s easy to imagine how things could would get crazy quick on a compilation of the label’s newer artists covering tracks from Warp’s back catalog. But, as random of a collection as it is, the covers on Warp20 (Recreated) are tied together by a common denominator of pure strangeness. Whether it’s Born Ruffians’ spunky indie-rock adaptation of Aphex Twin’s “Milkman/To Cure a Weakling Child,” Pivot’s electro take on Grizzly Bear’s “Colorado,” or a slew of other fantastic tracks, the strength of these renditions is they each create a feel of their own without losing any of the weirdo vibes of the original cuts. – AK 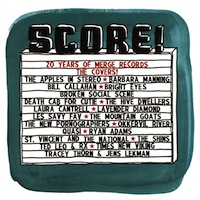 A 20th birthday is a big occasion for any label, and sure Merge didn’t cut it short when it came to celebrations. As part of a larger series of releases, the young-but-legendary label invited their own artists — as well as non-label acts — to cover songs across their discography. The result is, in a word, phenomenal. Bill Callahan covering Versus; Mountain Goats taking on East River Pipe; St. Vincent/The National’s on Crooked Fingers; Ryan Adams on Superchunk; Bright Eyes on The Magnetic Fields; the list goes on. Perhaps the sweetest moment on the compilation is Apples In Stereo’s spin on Neutral Milk Hotel’s “King of Carrot Flowers Part. 3”; the two bands both have their origins in the Elephant 6 collective and there’s an unmistakable chemistry between Jeff Magnum’s songwriting and Rob Schneider’s performance. And, in the end, that sort of admiration is what makes Score: The Covers! so damn tasty. This isn’t a thrown together covers effort; each artist on the compilation show earnest love for the songs and artists they’re paying homage to. – AK