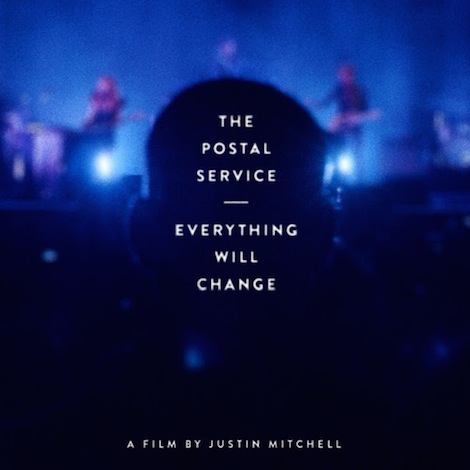 Last year, electronic indie-pop duo The Postal Service reunited for the 10th anniversary of their 2003 debut — and to date, only album — Give Up. The album was an unexpected runaway success for Sub Pop, and sold more than 500,000 copies, eventually being certified RIAA Gold. So when Jimmy Tamborello and Ben Gibbard reunited in 2013, it was kind of a big deal, at least in indie rock terms. And it’s been captured in a new Postal Service documentary, titled Everything Will Change.

Directed by Justin Mitchell, Everything Will Change was filmed during two nights that the band performed at the Greek Theater in Los Angeles. The documentary will first be screened at select AMC Theaters on Nov. 14 (more info about that available in the YouTube trailer description). And on Nov. 24, the film will be released on DVD and Blu-Ray via Sub Pop.

The DVD will feature the band’s performances, as well as interviews, backstage footage, and some funny clips like this one, directed by Tom Scharpling. Check out the trailer and tracklist below.

The Postal Service Everything Will Change tracks: