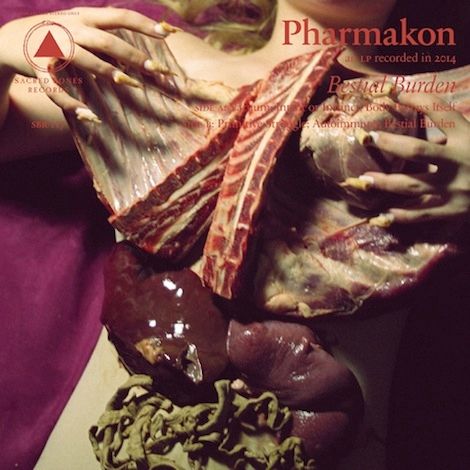 Last fall, at a now-closed San Diego club called The Void, Margaret Chardiet treated a few dozen stunned onlookers to a bizarre and captivating stage ritual that bordered on performance art. Backed only by a small arsenal of electronic devices and effects pedals, Chardiet crafted a half-hour of industrial noise cacophony, over which she screamed, howled and slowly but steadily pulled the audience out of its comfort zone. The deceptively petite musician with a talent for making a godlike din butted shoulders with people, rammed her head into some dude’s chest while shouting, tangled up crowdmembers with microphone cable and eventually pulled that same cable so far away from the stage that it brought several of her own instruments crashing down to the floor in the process. It was a surreal and intense scene to watch, but even that confrontational performance doesn’t quite capture the nightmarish scope of her new album as Pharmakon, Bestial Burden.

Written following an intense and potentially life-threatening ordeal that involved both organ surgery and sharing space with a dying man in the hospital, Bestial Burden takes the menacing industrial grind of last year’s Abandon and puts an even more harrowing real-life spin on it. Chardiet’s personal trauma haunts every corner of the album, from the organ-platter cover art to the unsettling titles (“Body Betrays Itself,” “Autoimmune”), and recordings of breathing and coughing on “Vacuum” and “Primitive Struggle.” It’s sometimes hard to listen to as a result—not uncharacteristic for Chardiet by any means. But the context behind the chaos lends it a weird, horribly frightening humanity.

In fact, Bestial Burden is beautiful in its own strange symphony of terror. Largely built around slow-moving, night-stalking dirges like last year’s “Crawling on Bruised Knees,” the album feels like an abstract reenactment of Chardiet’s own experience. The album opening breath-scape of “Vacuum” is probably the least noisy moment on the record, but by no means the least tense. Chardiet’s breathing and pulse speed up, mimicking the body’s own response to disease or injury—something gone horribly wrong. It takes a more harrowing turn in “Intent or Instinct,” with drones that sound like rusty pipes, and at three minutes in, a blood-curdling shriek that acts as a welcome mat that invites one to make himself right at home with the horrors unfolding before him.

Pharmakon is most compelling when Chardiet allows room for more subtle movements, and “Body Betrays Itself” is one such moment — a distorted wheeze of a track that stomps and grinds, but in no particular hurry, as Chardiet herself traverses between nervous moans and a full, throat-shredding assault. And there’s a similar structure to the incredible title track, wherein she delivers an echoing soliloquy over a rumbling bassline and a high-pitched whirr. It’s in these in-between moments — the ones in which there is no screaming, or at least less of it — that Bestial Burden is at its most unsettling. On a metaphorical level, it finds Chardiet at her most vulnerable — a place she clearly knows all too well. But on a listener there’s an added, unspoken aspect to these muted intervals: The knowledge that at any moment, everything could come completely off the rails.