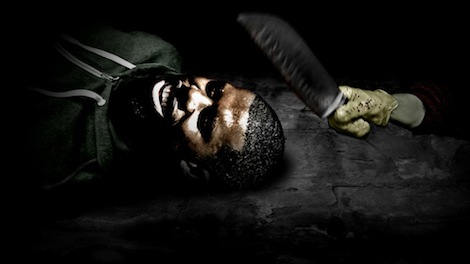 Flying Lotus has a scary Halloween treat for you. Fresh from his outstanding new album You’re Dead! (and that title is going to be important in just a minute), Stephen Ellison has debuted a new video that’s got all the spooks and gore of a real haunted house. The new clip, for “Ready Err Not,” is an animated clip, and it’s pretty graphic. It starts off with a group of mutant people, and pretty shortly Ellison’s head gets chopped off (see? he’s dead). Then there’s a whole network of intestines. We won’t lie to you — it’s pretty gross! Which means it’s perfect for Halloween.

The clip was directed by English animator David Frith (Salad Fingers), who Ellison says is one of his favorite animators of all time. It’s also airing as part of Adult Swim‘s Halloween marathon today. Just a warning though: Because of the graphic violence depicted in the video, you might want to reconsider watching this at work (or in front of children for that matter). Unless you work at a haunted house or your roommate is Leatherface. But that brings a whole different set of problems. Anyway, you can watch the Flying Lotus “Ready Err Not” video below.