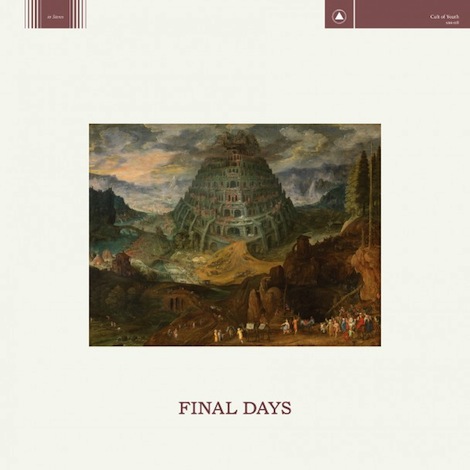 Darkness isn’t necessarily anything new for Cult of Youth. It’s pretty much the raison d’être for the Brooklyn post-punk outfit, whose aesthetic is a hybrid of the mid-period gothic grandeur of Swans and the alternately abstract and haunting neofolk of Psychic TV, but with considerably bigger hooks than either. Catch them live and you might even find them reveling in darkness quite literally — they’ve been known to wear sunglasses indoors at night. It’s par for the course when you’re a reliable dealer of sinister melodies and apocalyptic dirges; running too wide a chromatic spectrum has a way of nullifying that whole night-creature vibe.

Final Days sounds a lot like Cult of Youth’s darkest record to date, however, and it’s hard not to project that kind of mood when the title of your album alludes to the world’s end (or a great Young Marble Giants single), as does the Brueghel Tower of Babel cover art, and the footnote that the album contains both real human bones as percussion and lyrics that were written in jail. But Final Days is also the most expansive and eclectic release in the band’s catalog as well, with a dense and driving five-piece lineup of the band reinforcing just how far they’ve come since Cult of Youth began as a solo project of leader Sean Ragon. It just so happens that doom and unholy dread is better conveyed through eerily swelling arrangements guided by aggressive strums, menacing rhythms and the mournfully haunting cello of Paige Flash.

As the program begins, some disturbing vocal bleats ring out, like sirens echoing out over a landscape leveled by something truly horrific. “Todestrieb” drones and marches, its ambient industrial glow soundtracking a survey of the wreckage. Its five minutes are a preparatory introduction to the main event — an unsettling close-up of the rubble before the group ultimately sets it ablaze and begins to dance on top of the mangled concrete and steel. It’s not necessarily accurate to call Final Days a celebratory record, but it’s certainly a lively one.

Once “Dragon Rouge” kicks off with a minor key strum, the album ascends from its murky and ethereal opening into a more vibrant and dynamic set of music. Ragon & Co. launch headfirst into a manic punk progression on “Empty Faction,” an almost shoegazing density on “God’s Garden,” and a brooding, gothic folk on “Of Amber,” leading with the ominous opening line, “When you’re trapped between worlds/ He appears.” Still, the most explosive moment on Final Days is the nine-minute “Sanctuary,” which finds Ragon snarling and feral against a backdrop of frenetic percussion and a violent eruption of burning-world folk-punk. It’s an awe-inspiring climax before the comparatively serene “Roses” suggests a spare ray of sunlight beaming out upon the landscape. There is, perhaps, calm — even hope — but it feels more like an epilogue; it’s in the smoke and the thunder that Cult of Youth truly thrive.