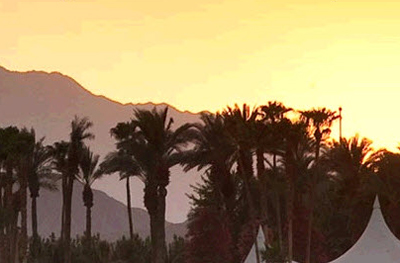 Summer won’t be here for another couple of months, but this Friday, unofficially, the season might as well begin, because summer festival season is upon us. This weekend kicks off the first of two Coachella weekends (which will be identical, lineup-wise), and from there the festivals will continue to roll out on a weekly basis. So we thought we’d help you out by compiling the price, dates, location, lineup, ups and downs of many of the biggest festivals in North America this year. At this time, neither Lollapalooza nor Outside Lands have revealed their line-ups. However, that hasn’t stopped people from buying tickets anyway. But we believe in an informed consumer. So here’s your Cliff’s Notes version of summer festival season. Take notes, and plan accordingly.

Other highlights: Not terribly far from Los Angeles or San Diego, for those that need a break from the heat; even closer to Palm Springs/Palm Desert; most of the lineup’s biggest names are skipping many of the country’s other big festivals.

Drawbacks: Having to share your one-night-only At the Drive-In experience with 50,000 other people; guaranteed sunburns/heatstroke; the inevitable struggle that comes with trying to find your car at 3 AM.

When: May 3-5
Where: Brooklyn Academy of Music, Brooklyn, N.Y.
Price: $45/day; $110/3-day pass
Curated by Bryce and Aaron Dessner of The National
Website: CrossingBrooklynFerry.com

Other highlights: Intimacy, proximity to public transportation, indoor venue with air conditioning, most likely won’t feel much like a festival.

Drawbacks: The National, apparently, isn’t playing; some days more stacked with dynamic performers than others; attendance will probably reinforce whatever Brooklyn stereotype people have attributed to you.

Other highlights: Much better electronic/hip-hop lineup than last year, beautiful Pacific Northwestern landscape, Jack White might pull another one of his weird and highly amusing publicity stunts.

Drawbacks: Still too much beard-folk, and a little too much M.O.R. alt-rock for that matter, likelihood of confusing SBTRKT with STRFKR, and it’s also been known to rain.

Other highlights: All the debauchery of SXSW without the corporate sponsorship, more punk and metal than any festival you’ll attend this year, an actual unique festival experience.

Drawbacks: You’ll probably take some collateral brusies, your denim jacket with patches might get confused for someone else’s, if you thought SXSW was hot…

Other highlights: Not terribly expensive when you consider how massive it is, more wide open space than most other festivals, more comedy, more everything!

Drawbacks: Geographic isolation, a surprising lack of metal, an even higher concentration of jam bands, dudes who will incessantly remind you that Skrillex… was… actually… fun, and the inevitable attendees who take delight in casting hygiene to the wind.

Other highlights: Per the website, No overlapping sets!; better selection of food than your typical festival.

Drawbacks: Ticket price plus ferry or shuttle tickets could add up to a pretty pricey weekend; separation of dance/disco acts from indie rock acts in two separate days makes it seem strangely segregated.

Other highlights: More metal than most summer festivals (obviously), potential to blow some $ on nearby casinos, Metallica redeeming recent poor artistic decisions through apparently decent taste.

Drawbacks: High likelihood of hearing “Death to False Metal” all weekend, Avenged Sevenfold reminding us that screamo/nü-metal is still around, possibility of having to endure something from Lulu.

Drawbacks: The heat and the humidity, ambient artists losing some of their mojo in a sea of bodies, the number of attendees who already have their post-fest thinkpieces planned.

All Tomorrow’s Parties: I’ll Be Your Mirror

Other highlights: Guaranteed against overcrowding, a more diverse/interesting representation of genres than most other festivals, no dusty fields, (probably) no naked wizards

Drawbacks: $200 is a fairly serious commitment, school’s in session, summer’s over… then again those might be arguments in favor of going