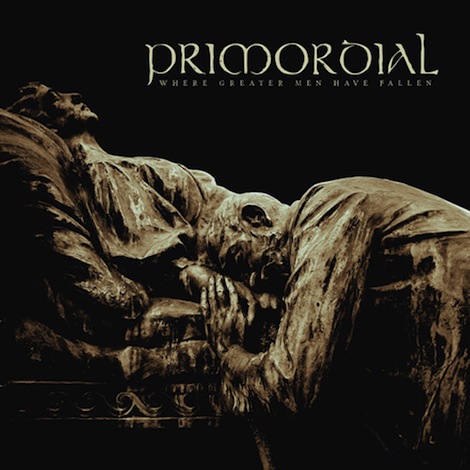 Since at least 2007, it hasn’t made all that much sense to call Primordial a “black metal” band. On some level, it’s never been exactly right — the Dublin-based metal outfit has never been a source of the theatrical “evil” or the demonic tendencies of so many other bands that emerged when they did (which was around 1987 for those ready to do a double-take). Their epic tales of folklore, nature, war and spirituality have always made them an oddity among their extreme metal peers, but even at their most earnest, they’ve delivered every word and every note with a torrential intensity, and utmost seriousness. But where that intensity might have translated to blast beats and screams on 1998’s A Journey’s End, by 2007’s To The Nameless Dead, they had allowed that approach to evolve into something with maybe a slower tempo, but a greater force. Primordial sounded less like a supernatural being, but more like an unstoppable army.

Where Greater Men Have Fallen, the band’s eighth album in 19 years, is a potent blend of their most muscular and mystical elements, and a strong example of how great music — and great metal, natch — takes patience and care to get right. As the band has progressed over the past 27 years, they’ve emerged — on average — every three years with a colossal work that builds on their legacy while carving out something newly awe-inspiring. In a sense, it can be seen as much an obstacle as it is a strength; the higher up that Primordial constructs their imposing tower, the more difficult it is to reach the summit anew.

So it’s to their credit that each new album never feels like a step backward. Just as 2011’s Redemption at the Puritan’s Hand felt like a refinement of the group’s powerful roar, Where Greater Men Have Fallen is an amplification of it. This is arguably the heaviest the band has ever sounded, from the militant chug of the title track to the welcome return of a black metal assault on “The Seed of Tyrants.” But where most metal this massive and this heavy has a tendency to pummel or overwhelm, Primordial’s empowers. You could very well run a marathon or lead a charge against invading hordes with this as your soundtrack and it would be equally appropriate.

The flipside of metal this huge is its tendency to exhaust, and Primordial certainly aren’t immune to such complications. The way they combat it is in the songs  themselves. Sure, it’s one of the band’s heaviest works, but it’s also one of the most diverse. It’s hard not to immediately marvel at the arresting charge of the opening track, which gallops mightily toward vocalist A.A. Nemtheaga’s climactic bellow: “Where greater men have fallen/ We are ready to die.” There’s a greater sense of doom in the slower moving, arpeggiated riffs of “Babel’s Tower,” which recalls Triptykon or late-period Celtic Frost. But it’s not really until “Ghosts of the Charnel House” where it becomes clear what Where Greater Men Have Fallen truly is: A great fucking rock record.

Agalloch – The Serpent and the Sphere