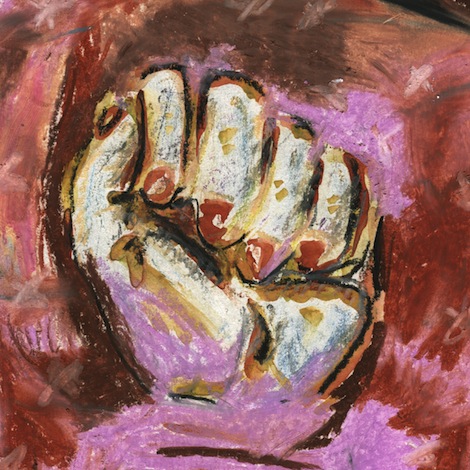 Don’t be surprised if you find yourself a little on edge after listening to Boston-based noise-rock band Krill for a few minutes. The Boston-based noise rock outfit carries a hefty amount of tension and release in their heavy, albeit melodic epics. But that’s not necessarily it; the nervous, jittery personality driving the anxious feeling behind the group’s new album A Distant Fist Unclenching is vocalist Jonah Furman. He doesn’t really scream or shriek, or roar or bellow. He does all of these things in small doses, sprinkled throughout the album, but most of all, he does what I can only describe as an erratic honk. His is a wavering pitch, an unhinged warble that sounds a little like The Dismemberment Plan’s Travis Morrison with Tourette’s. If you’re not ready for this, it can be more than a little unsettling to sit through for more than a few minutes at a time.

The peculiar thing about Krill’s music, however, is that it’s oddly complementary to Furman’s charismatically spastic vocal style. The way that A Distant Fist Unclenching plays out over its 44 minutes is like a sparring match between two evenly matched opponents; where Furman erupts, the band plunges into their heaviest burst of low-end. And where Furman scales back, the band eases up on the intensity, letting the tension simmer just a little bit longer — you know that there’s an explosion coming just around the corner, but it often happens a little later and after a longer period of suspense than a less neurosis-forward band might.

Taken together, what Furman and his bandmates end up creating is an avant garde post-hardcore gem that more closely resembles Shudder to Think’s Pony Express Record than any of Fugazi’s albums, or the emo revival album voted most likely to writhe with nervous energy. And as much of an acquired taste as Krill might seem initially, there’s a winning charm to their jarring and uncomfortable tactics. The opening of “Foot” jerks and throttles as Furman works through inconvenient sexual fantasies — “I came and visited you at work/ I couldn’t help but imagine you without your shirt” — only to reach a thunderous, but brief climax at the chorus. S&M tale “Torturer” removes the sensuality of the practice by sustaining its verses in a way that seems to parallel the anticipation of that first titillating crack. Yet, “Squirrels” finds Furman & Co. scaling back a little, getting comfortable in the quieter, calmer spaces, if only to put the focus back on the anxieties that Furman seems to be working through: “To be given one shot, and to know I will blow it.”

A Distant Fist Unclenching isn’t by any means a difficult listen — each track is bolstered by solid, if sometimes rhythmically complex melodies. And when the band is on, they’re both forceful and pretty catchy. But the secret to their success is actually seizing on the anxiousness that bubbles up either through the rhythm sections typewriter returns or Furman’s yelps. It’s an album that’s about uncomfortable situations, played in often uncomfortable ways, but you might be surprised to hear just how invigorating that can be.