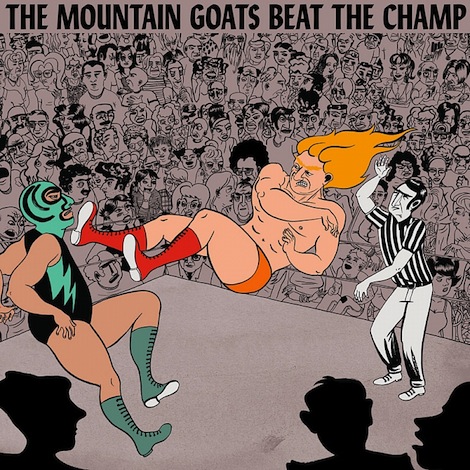 You may or may not recall a time in late 2012 when John Darnielle of The Mountain Goats had a chance, however slim, to be named Poet Laureate of the United States. It didn’t pan out — petitions require 24,000 signatures to move forward and this one only received 4,106. But when I heard about it, I didn’t dismiss it as overzealous fandom. Darnielle, quite frankly, is one of our finest songwriters and storytellers of the past 25 years. You know the people he writes and sings about. You’ve seen them. Perhaps you’ve been them. They are kids in shitass towns starting metal bands, lonely people attempting to re-learn life amid the alternating turmoil and stasis of a breakup, alcoholic couples at war with each other and themselves, abused children, criminals petty and heinous, famous faces (Amy Winehouse and Lon Chaney Jr., to be specific), and so many others. They’re the full best/worst/everything-in-between spectrum of America.

So it’s unsurprising but no less pleasurable to say that on the latest Mountain Goats album, Beat The Champ, Darnielle shines a light on a corner of society and culture that many of us ignore or laugh off: professional wrestling. Many of the strongest Goats records are centered around a single theme or story, be it marital collapse (Tallahassee), a brutal childhood (The Sunset Tree) or the themes of the Bible (The Life of the World to Come), and Champ’s wrestling focus provides a setting for these songs that vacillates between outsized garishness, dark humor and deep pathos without the transitions ever being awkward.

Champ isn’t exactly chronicling the Ric Flairs and John Cenas of the world. Songs like “The Legend of Chavo Guerrero” and “Choked Out” are about the lifers of the sport. The people who love it enough — or perhaps don’t know anything else well enough — to fight most of their matches for regional leagues at tiny venues, maybe getting a chance at a televised contest but in all likelihood never coming close to Wrestlemania and merchandising deals. The most immediate comparison is Darren Aronofsky’s The Wrestler, a film that for all of its flaws had a ground-level realistic empathy for its protagonist similar to Darnielle’s.

Musically speaking, Beat The Champ isn’t far off from previous Mountain Goats efforts. But while Darnielle’s voice and guitar are still the most prominent instruments, the foundation laid by drummer Jon Wurster and bassist Peter Hughes has become crucial to the band’s sound. Wurster’s contributions are especially notable, supplying everything from jazzy brush fills to pounding tom-tom rhythms based on particular songs’ needs. The album is also notable for containing some of Darnielle’s most subdued and most ferocious songs — the piano-led “Southwestern Territory” and slow-picked“Hair Match” falling into the former camp, the hard-charging “Foreign Object” and “Werewolf Gimmick” representing the latter. (The album’s primary flaw may be the slower songs; the lyrics carry them while the music plods and putters.)

While the subject of wrestling is taken seriously as a narrative theme, that doesn’t mean there isn’t humor to be found. The hook of “Foreign Object” — “I’m gonna stab you in the eye with a foreign object” — and its delivery are as gleefully dark as anything Darnielle’s composed. And the internal monologue of the wrestler in “Werewolf Gimmick” pumping himself up with a fearsome backstory summarizes one of the album’s themes of escape through transformation into an outsized character: “Nameless bodies, in unremembered rooms/Run howling through the carnage when the wolfbane blooms.” You laugh, because of the outre nature of the line, but then it catches in your throat because of the compassion Darnielle makes you feel for the character.

While Beat The Champ is not directly autobiographical the way The Sunset Tree is (perhaps a good thing, as the pain of that record is not easily revisited), Darnielle’s childhood absorption of wrestling as pop culture is as important to its success as the individual stories about wrestlers themselves. When he sings, “I hated all of Chavo’s enemies/I prayed nightly for their deaths,” on “Chavo Guerrero,” you’re reminded of all the times you passionately followed a hero, whether it was a wrestler or superhero or star ballplayer or whoever else, and think of how their successes and setbacks were yours too.

The Mountain Goats have exhibited such consistency over their approximate two decades of existence that it’s difficult — if one is even so inclined — to qualitatively rank Beat The Champ against past albums. Perhaps it’s best not to bother. But it is, without a doubt, one of the band’s most affecting and rich narrative works, once again wringing melodic drama out of what many might dismiss as kitsch or frivolity.

Iron and Wine – Ghost on Ghost