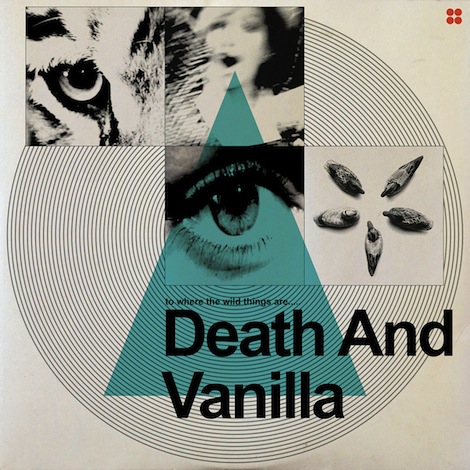 The fourth song on To Where the Wild Things Are, the third album by psychedelic Swedish duo Death and Vanilla, is called “Time Travel.” This isn’t a coincidence. Since their 2012 self-titled debut, Marleen Nilsson and Anders Hansson have been opening up a seam in the time-space continuum to serve as a portal to a kind of half-imagined, surrealist and stylish period of the 1960s where French ye-yé pop, American psychedelic rock and the moody jazz of Krzystof Komeda intersect. There’s a charming, retro quality to Death and Vanilla’s music, and it’s that way by design. You can’t necessarily call it nostalgic — as much as you might be able to detect specific reference points in the duo’s music, none of them ever sounded quite like this. But they evoke a certain feeling and aesthetic, and one not entirely of this time.

Yet, like any band that can be called “psychedelic,” the swirling and disorienting wisps of sound that make up the 10 tracks on To the Where Wild Things Are are less about traveling through time than they are about being transported to a different place. And to that effect, To the Wild Things Are is a sensory experience as much as it is one based in melody or rhythm. Many of the tracks are steeped in heady layers of reverb, shimmering vibraphone, pulsing motorik beats and Nilsson’s dreamy, otherworldly voice. It’s very pretty — I dare say that Death and Vanilla seem incapable of doing anything that isn’t. But there’s also a darkness just tracing the edges, like on the sinister bleeps of “Hidden Reverse,” or the haunting, almost minimalist opening of “Shadow and Shape.” Death and Vanilla’s music might frequently feel like it’s caught in a dream, but the push and pull between bliss and melancholy sometimes creates some ambiguity about what kind of dream that is.

As much as Wild Things is representative of a broad array of influences rather than any hero worship in particular, Death and Vanilla sometimes wear their inspiration on their sleeve. Nowhere is this more apparent than on opening track “Necessary Distortions,” with a sinister pulse echoing that of psych icons Silver Apples, as well as Nilsson’s chant of “Oscillations/ Isolation,” which more explicitly and winkingly references that band. Though the closest band in spirit to Death and Vanilla would most certainly be the innovative UK cult electronic group Broadcast, who made a similar blend of modern and vintage sounds. Likewise, the cover art for Wild Things has a design similar to the instantly recognizable aesthetic of Julian House, whose design work adorns just about all of the Broadcast catalog.

Though Death and Vanilla’s more overt references to ’60s psychedelic rock are certainly fun, their most successful moments are those in which they focus more intently on crafting an atmosphere all their own, like on the heavily obscured “The Optic Nerve.” It’s one of the band’s simpler tracks, adrift on heavy layers of reverb and delay, as Nilsson’s voice is nearly swallowed whole by the noxious cloud of effects. But there’s a core of melody and melancholy beauty that keeps it grounded. Death and Vanilla’s music never travels too far through time or space to leave you stranded, but should things get too hazy, Nilsson’s voice and their firm grasp of melody are tether enough to keep from floating away.

Death and Vanilla : Are You a Dreamer?