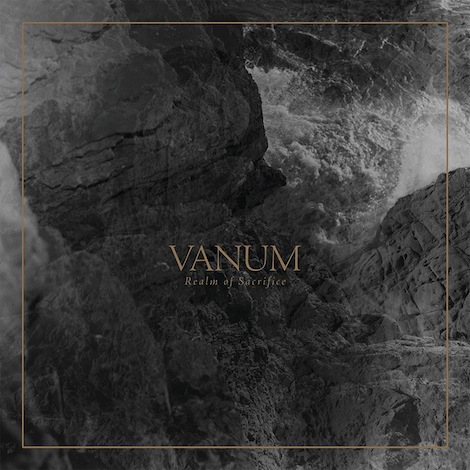 Kyle Morgan and Michael Rekevics—who also play in Ash Borer and Fell Voices, respectively—have a similar history of playing melodic black metal, heavy on mystique. Neither of their other bands is particularly press-friendly, evading interviews and keeping their faces mostly hidden in photos (whichever ones actually exist). Their music is often lumped in with a regionally-specific sort-of-genre called “Cascadian black metal,” noted for being made by bands with a homebase in proximity to the Cascade Range. If there’s one thing that Morgan’s Ash Borer and Rekevics’ Fell Voices truly share, however (other than stages and real estate on the same slab of vinyl), it’s a penchant for a particularly elegant and sophisticated form of black metal, and one that comes together beautifully on Realm of Sacrifice, the duo’s debut album as Vanum.

The four tracks on Realm of Sacrifice are lengthy, abrasive yet captivating metal journeys, as harrowing and as menacing as anything either musician has done in the past. Neither Ash Borer nor Fell Voices ever hewed to closely to the traditional, instead favoring more slow-burning, gradually building pieces of black metal art rather than immediate, guttural assaults. And that’s certainly true here, the four compositions—three of which surpass 10 minutes apiece—leave a hell of an impact when they hit their stride, their heaviest moments sufficiently brutal and devastating. But Realm of Sacrifice isn’t always about the brutal or the devastating. In fact, it’s often about the anticipation or the comedown. The opening guitar riffs of “Comedown” are airy and beautiful, ringing out with a reverb-heavy melancholy. And there’s a brief but ominous touch of gothic synthesizer droning at the open of the closing title track.

Plenty of bands make passable black metal albums with great interludes, however, but Vanum is not one of them. As beautiful as they can be at their most restrained, they match that with the anguish and triumph that they pour into their most exhausting moments. The powerful surge and soar in the opening rush of “Realm of Ascension” is both raw and accessible, showcasing the best of what black metal can be without straying too far from a direct approach. And in the most intense moments of “In Immaterial Flame,” the duo recalls the most ferocious moments of the ’90s black metal Renaissance, yet within their reasonably simple guitar-and-drums setup. The level of towering sound that these two build from fairly simple means is impressive, to say the least. It’s unlikely that the members of Vanum intend to provide any insight behind their roaring metal epics anytime soon, but there’s no immediate need for director’s commentary. Realm of Sacrifice is a sensory form of art, better experienced than explained.