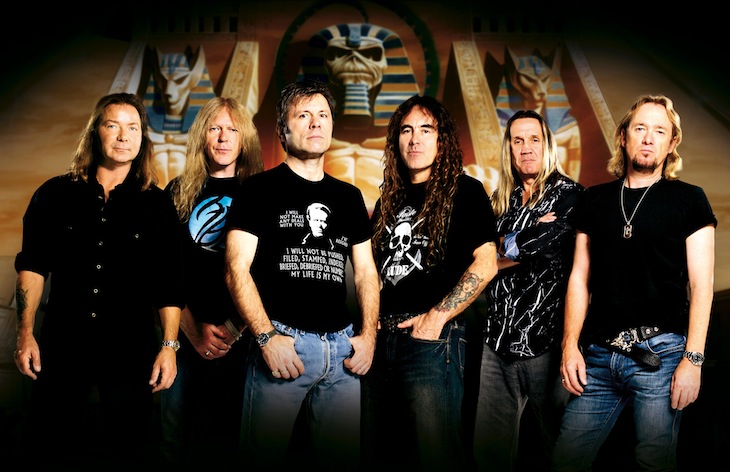 Earlier this month, thrash metal legends Slayer announced the details of Repentless, their first new album since 2009’s World Painted Blood, and their first since the death of guitarist Jeff Hanneman. It’s bittersweet, in a way, because it’s not entirely the same band that it used to be. Dave Lombardo isn’t in the band anymore, either, which leaves only half of the classic lineup: Tom Araya and Kerry King. But Slayer is Slayer, isn’t it? Based on the tracks they’ve released from the new record (such as “Repentless“), it sure sounds like Slayer, and that’s maybe the most important thing we can take away from this.

That would be enough to make June a month to celebrate, as far as big-name metal goes. (And big-name metal hasn’t been much to write home about until recently.) The same week, Iron Maiden announced their long-awaited follow-up to 2010’s The Final Frontier, which was thought to be the band’s last album for a time (putting “final” in the title tends to have that effect). Singer Bruce Dickinson recently underwent surgery to remove a cancerous tumor, which put future recordings in question, but not only is he back with the band, with new music, it’s actually a double album—and it features their longest song yet, “Empire of the Clouds,” which knocks “Rime of the Ancient Mariner” off the pedestal.

And with both Iron Maiden and Slayer releasing new albums this year, you’d think that 2015 would be a banner year for metal titans. But it just so happens that Motörhead are also releasing an album this year, titled Bad Magic. The album marks the 40th anniversary of the band, and follows 2013’s Aftershock. And though the sound of the album remains to be seen, simply reaching this milestone is an event worthy of celebration in itself. Besides, Motörhead albums are sort of like pizza and sex—even when they’re not that great, they’re still pretty good.

This triumvirate of metal gods flooding the market with what look to be three very promising new albums is really just an added bonus to what’s already been a strong year for metal. But longevity in metal isn’t necessarily such a shocking thing. Plenty of rock bands from the ’70s and ’80s are still trucking, long after their heyday. Hell, The Rolling Stones are still touring. But while other genres have certain expectations of their aging stars—that they shouldn’t act or dress like they’re still teenagers, for starters—metal doesn’t really give a shit. Being a genre of misfits and rebels basically means anything goes, and if the music still rocks as hard as it did in the early days, that’s all that matters. All of which is to say that more than three decades (and in Motörhead’s case, four) after first letting their power chords ring, it’s encouraging to see that the Old Guard still has plenty of riffs in the hopper.

The best metal tracks of June 2015

Tristan Shone, the sole engineer, musician and robotic visionary behind San Diego’s Author & Punisher, has never played any conventional form of metal. His closest analogues are industrial-metal crushers like Godflesh (whom he’s covered), so it’s not all that surprising that the first single to emerge from his fourth album, the Phil-Anselmo-produced Melk En Honing, is pretty weird and sort of terrifying. It’s less a single than it is an industrial suite that transitions between discordant moments of ambiance, surging escalations of electronic buzz, slow-moving doom metal sludge, and a melodic horror-flick bridge that presents the track’s finest moment. One listen probably won’t be enough to fully pick up on what Shone’s doing here, so steel yourself for another launch through this track’s terror chute.

I’m always hesitant to use the term “supergroup” in the context of metal, simply because the underground metal community is fairly collaborative on the whole. It’s not too uncommon to see new bands starting up featuring familiar names. In fact, on this month’s roundup of essential tracks, there’s a lot of collaborative work going on, even in the cases of bands with just one sole member. Still, Vanum is sort of a supergroup of sorts, comprising the duo of K. Morgan of Ash Borer and M. Rekevics of Fell Voices. And like those bands, Vanum is black metal with an atmospheric, post-rock quality to their epic compositions, which are as pretty as they are explosive, like “Convergence,” which takes a while to fully reveal itself as a metal song. Once it does, however, watch out for the 12-minute torrent of intensity that unfolds.

[from Realm of Sacrifice, out June 23; Profound Lore]

Locrian – “An Index of Air”

Here’s where we add the “arguably not metal” disclaimer. Locrian have long occupied a peculiar space in extreme music, their innovative and avant garde sound having roots in noise, industrial, dark ambient and shoegaze. But it’s definitely heavy—the Chicago-based band might not technically play metal under the rules that we understand it, but they create something that’s at times even more devastating. “An Index of Air” takes a few minutes to get off the ground, but the tension is part of what makes it so wonderful. Sheets of noise create a hauntingly stunning foundation for the explosion to come, and eventual lift off into melodic, gorgeous black metal. All heavy music should strive to be so transcendent.

[from Infinite Dissolution, out July 22; Relapse]

A duo that hails from Slovenia, Dalkhu are one of those bands that’s not too interested in letting the Internet know all that much about them. The two musicians use only their initials, and don’t perform live. And sure, we’ve already seen this plenty of times in the past—the ’90s-era wave of Norwegian black metal passed along some of the wrong messages to subsequent generations of metal. But while the anonymity gimmick isn’t all that inspired (but kudos to the band for having a good Facebook presence!), their music certainly is. Riding a raw and intense middle ground between death metal and black metal, with more than their share of melody to push it quite a few notches above the pack, Dalkhu do just about everything right on “E.N.N.F.” They don’t just attempt something epic here, they pretty much nail it. Hell, I’m half inspired to hoist a cigarette lighter during those final three minutes.

[from Descend… Into Nothingness, out in September; Iron Bonehead]

Danish one-woman black metal outfit Myrkur made an impressive debut in 2014 with her self-titled EP, an eight-track introduction that blended the lo-fi  harshness of old-school Norwegian black metal with a 4AD-inspired dreaminess that echoed the melodic otherworldliness of Lush or the Cocteau Twins. The first track to be released from her proper debut, M, is a similarly eclectic mixture that keeps her intoxicating psychedelic quality, but incorporates some of the atmospheric black metal sound of Ulver. It just so happens that Ulver’s Krystoffer Rygg recorded the album, so it’d be hard not to hear some of that influence, but all the same, Myrkur’s proper debut album seems to be off to a great start with a song that not only showcases her great songwriting—and more aggression than we’ve heard from her before—but impeccable production as well.

Author & Punisher‘s Melk en Honing: San Diego one-man industrial outfit Author & Punisher has a pretty consistent discography, dating back to 2010’s Drone Machines, but Melk en Honing is his most layered and ambitious work to date. That might have something to do with recording the album in New Orleans with Phil Anselmo, or it just might be the natural outgrowth of an already impressive path of creativity. Either way, it’s brutal, beautiful and rewards repeat listens. (Housecore)

Failure‘s The Heart is a Monster: While Failure falls more into the heavy-alternative-rock category, they’ve played a pretty significant role on influencing some of today’s crop of metal bands. Indeed, there’s a heaviness to The Heart is a Monster, and a prog-sized ambition as well, though it’s really the strength of their melodies—and the hypnotic production—that made them such a revelation to begin with. They’ve reclaimed much of that spark here, even if it took them 19 years to get here. (INgrooves)

False‘s Untitled: Even though this album just came out, it almost made our list of 10 essential Twin Cities albums; yeah, it’s that good. The Minneapolis black metal band began with a strict adherence to anonymity, which has been fading slightly over the last couple years (they’re pretty normal looking for a black metal band, if you’re wondering). Nameless, faceless or not, False makes black metal that’s unforgettable, simply because of how powerful—and well written—it is. And its closing track, “Hedgecraft,” is basically a rock anthem. You know, with screaming and blast beats. (Gilead)

KEN Mode‘s Success: Winnipeg’s KEN Mode have always maintained a delicate balance between two not-so-delicate styles of music—metal and noise rock. On Success, they push much further into noise rock territory than on past albums, having recorded the album with Steve Albini and traded some screams and riff lightning for barks and feedback. But in doing so, they’ve also put a finer point on their melodies, which are uniformly strong here. That it’s also sardonically hilarious means they’re getting much closer to McLusky than Botch, but that’s not really a problem if you ask me. (Season of Mist)

Lucifer‘s Lucifer I: While we’re talking about classic metal, let’s talk about a newer band with a classic sound. Lucifer is a Berlin-based band with members formerly of The Oath, Cathedral and Angel Witch, and they have a powerful, old-school doom and occult rock sound that nods to the ’70s while maintaining modern production values and outstanding songwriting. Add to that the powerful, melodic vocals of Johanna Sadonis and you’ve got something special. (Rise Above)

Vattnet Viskar‘s Settler: Now here’s a metal album that’ll take a lot out of you—not just because of its demanding volume and physicality, but its emotional toll. Its cover art was inspired by astronaut Christa McAuliffe, who died in the Challenger explosion of 1986. And the album itself arrives after a series of personal traumas for the band. They exorcise those traumas via the best set of songs they’ve written to date, which span from shoegazing post-metal to blistering noise rock. And there’s plenty of thunder and murk in between, to maintain a metallic undercurrent, if one that’s not traditional in any sense. One of the best metal albums of the year, without question. (Century Media)

Brent Hinds of Mastodon says he hates metal. That one’s a head scratcher; who commits more than 15 years to playing a style of music that you don’t like? I’m skeptical here…I can understand if it’s lost its appeal for him, but something tells me that this might be an overreaction.

Metal fans are apparently more faithful to their partners than fans of other styles of music. I just hope nobody thinks I’m a homewrecker because I also happen to love jazz.