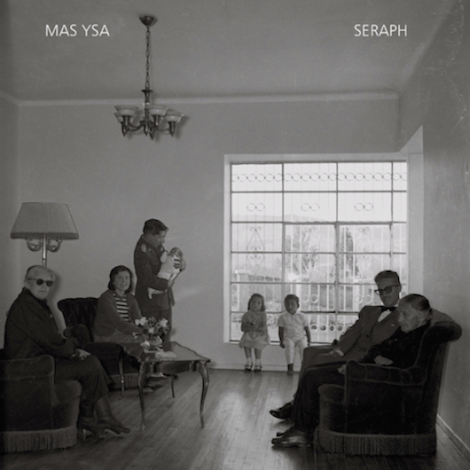 Mas Ysa‘s music isn’t that different from that of most other singer/songwriters. It’s based heavily on strong melodies and sing-along choruses, written with real emotions and sung with conviction. In a parallel universe, Mas Ysa’s Thomas Arsenault might be strumming away at an acoustic guitar at an open-mic in a coffeehouse right now, belting his way through Joni Mitchell covers and picking up the pieces of a recent breakup. But Arsenault’s arsenal is an assortment of electronic tools that surround him at his solitary live performances. Like Grimes, James Blake or Majical Cloudz, Mas Ysa’s songs are wrapped in layers of synthesizers and sputtering beats. But there’s something simple and classic about the songs on debut album Seraph, which follows last year’s Worth EP, that suggests he really could be playing these with an acoustic guitar at an open mic, if he really wanted to.

There’s a balance of the ethereal and the gigantic on “Margarita,” a heroic pop song that feels less akin to the aforementioned Grimes or Blake, and more like a Peter Gabriel or U2 song from the mid- to late-’80s, which is an impressive enough feat in itself. The song bleats and beeps and thuds, but at heart its pop that aims for the heavens, like the album’s winged namesake. And there’s a similar feel to “Suffer,” which on arrangement alone sputters along like “Solsbury Hill” at three times the BPMs, but Arsenault himself shrieks and squawks like Sunset Rubdown’s Spencer Krug on a bender. His vocal abilities tend to veer between the heroic and the histrionic, and this is the one case where it swings too far to the latter. But restraint goes a long way with Mas Ysa; the hushed ambiance of “Gun” is far and away one of the album’s best moments, a barely-there ballad that achieves a payoff every time a new chord shows up.

Arsenault clearly favors the dramatic, as evident by the 30 seconds of near-silence that leave the listener in suspense before the opening title track starts up. And most of the songs on Seraph pretty much all head toward some kind of major emotional climax, be it the eruption of a house beat in “Arrows” or the interwoven layers of vocals on “I Have Some.” Every song leads somewhere, some in more subtle fashion than others, but Arsenault isn’t interested in the pop song without a payoff. And there’s something admirable about that kind of commitment. For all the production flourishes, climactic shifts and rises in volume, however, there’s one constant that never changes: Arsenault writes simple, satisfying pop songs (mostly) built to withstand whatever level of exclamation or ambiance he chooses to build them up with.