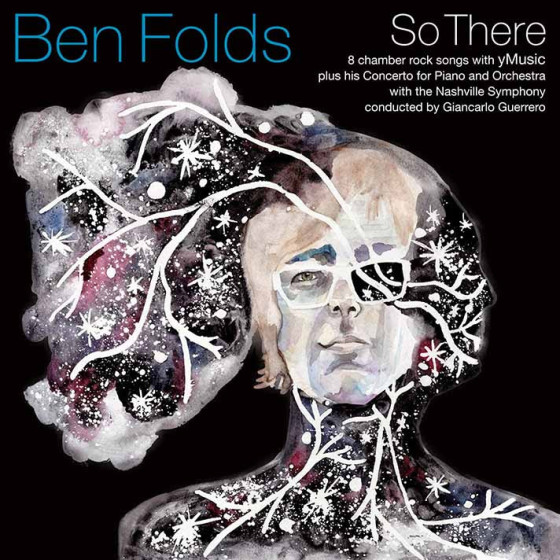 Ben Folds is not known for staying in one place, musically. While the bulk of his work comprises piano-based “punk rock for wussies” as he described it in the early days of Ben Folds Five, he has also given us experimental projects like the electronic and esoteric Fear of Pop: Volume 1, or the 2009 album of a capella versions of his songs, or the collaboration with author Nick Hornby, Lonely Avenue. When he reunited with Ben Folds Five for 2012’s nostalgic The Sound of the Life of the Mind, it appeared as though he was returning home for good. It turns out he was just making a rest stop on his way to his most ambitious recording yet. So There tests the commitment of his fans with eight chamber-pop recordings with New York classical sextet, yMusic followed by his Concerto for Piano and Orchestra, in three movements.

Despite the nontraditional arrangements, the songs contain elements of Ben Folds’ signature style: witty and narrative lyrics, circuitous melodies and rich harmonies and a piano played with the intensity of one who clearly started as a drummer (as Folds did). The question for this project was whether the yMusic ensemble would be used for flourish and decoration, or if their parts would be integral and indispensable elements of the songs. The answer is yes and yes. On the opening number, “Capable of Anything,” even though the strings and woodwinds are distinct, one could easily imagine that if the song were performed on only piano, it would have the same effect. The next song, however, “Not a Fan,” requires the added instruments to create the dynamics necessary to marry the lyrics to the music. It chronicles an entire relationship from reverent infatuation to tired exasperation, and yMusic describes the changing tone of the story expertly.

“Yes Man” also effectively combines the musical accompaniment and Folds’ brand of narrowly focused lyrics as it bemoans what it’s like to be with someone who won’t be totally honest with you (“Why didn’t you tell me that I got fat? / Now I’m crying all the way from the Fotomat / ‘Cause I see I got more chins than a Chinese phone book has”). “F10-D-A” begins with Folds seemingly conducting the ensemble (“F tothe A, F to the A, to the D”), but then additional lyrics fill in the story (“C what it’s like to B… Flat”)—that’s just good fun. The last song of the yMusic portion, “I’m Not the Man,” lets the sextet take the forefront of the music more than on the other songs, allowing the strings to soar above the piano.

In case fans didn’t have enough non-rock music by this point, So There concludes with Ben Folds’ first piano and orchestra concerto, in three parts, performed with the Nashville symphony. Listening to a concerto is a completely different experience than listening to pop songs, but one is able to discern touches of Folds’ whimsy, including knocking on the piano lid, jazzy sevenths and chromatic runs, sloppy double-fisted poundings and perhaps even hints of some early Ben Folds Five numbers here and there. All in all, So There is a must-own for any Ben Folds fan, and it makes you wonder “what’s next”? There appears to be nothing he cannot do; perhaps the long-rumored tribute to Dr. Dre’s The Chronic is finally on its way.