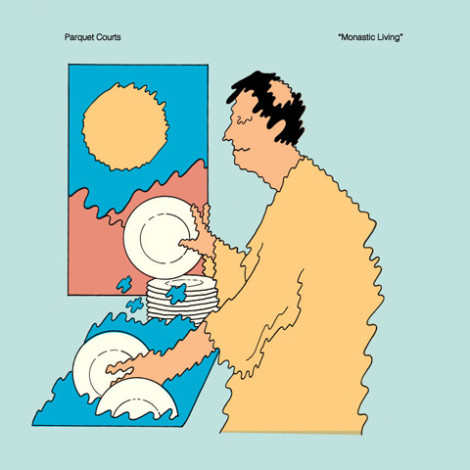 Advance press copies of Monastic Living were sent with a disclaimer: “As much as anything the band has done in the past, this release is a statement as well. It’s suggested that you read the attached liner notes prior to listening to the EP.” Those liner notes, it turns out, are an expanded version of the lyrics to the EP’s first track, “No No No,” in which Parquet Courts frontman Andrew Savage rails against the notion that he’s a poetic voice to be admired. “I don’t want to be an influence,” he yelps. “I don’t want you to understand… No, no, no / We’re just a band.” Then Savage falls silent, and Parquet Courts deliver the most challenging half-hour of music of their career.

Monastic Living manages to be both a hard left turn and a natural progression for a band whose career as been built on projecting a sense of acerbic, soul-searching insularity. It makes sense that they would chafe against the “voice of their generation” label that the indie press has saddled them with, both implicitly and explicitly. If there’s been a through-line throughout the band’s lyricism, it was made clear on last year’s Content Nausea: the omnipresence of cultural noise stifles individual development. By delivering an EP consisting mostly of lo-fi drone rock, Savage has removed himself, at least temporarily, from the chorus of voices telling consumers what to think. Monastic Living accomplishes that at first through self-effacement (Savage calls himself a “pure-fool” in the liner notes, then proceeds to misspell a good portion of the following lyrics), then by burying any sense of personality under a landslide of churning, repetitive guitar riffs.

There’s still a hint of the band’s trademark wryness here and there, but it’s directed inward this time; a few of the instrumental songs here have knowingly self-important titles like “Poverty and Obedience”; squint and “Elegy of Colonial Suffering” reads like a sly parody of the unwieldy grandiosity of Content Nausea’s “Uncast Shadow of a Southern Myth.”

But there’s hardly any winking going on with Monastic Living’s instrumental tracks, which are about as far removed from the tight melodies that defined the band’s earlier works. If anything, the slow-circling jams of Sunbathing Animal prefigured the shapelessness of these songs, which often play like in-studio experiments. “Elegy of Colonial Suffering” and “Frog Pond Plop” are churning snippets of shoegaze that start and end abruptly, as though they were cut directly from tapes of Loveless outtakes. “Prison Conversion,” the eight-minute closer, seems more an experiment in texture than a song in and of itself.

It’s all an evolution of the band’s past sounds; “Poverty and Obedience” continues exploring the distorted, plinking synths of Content Nausea’s interludes. But “Monastic Living I,” with its caterwauling guitar solos and relative structure, is the only one that feels like it could have been part of a previous Parquet Courts record. The approach renders the EP a snapshot of a band feeling out boundaries, seeing how far they can push one sound before doing the exact same thing in another direction.

That the group was able to formulate a philosophical backdrop for those explorations is impressive, even if it’s likely that Savage’s self-imposed vow of silence will be short-lived. Of course, the cohesion that overarching concept lends to the record also pushes against that very concept; it suggests an answer—or at least reaches for one—to the existential questions that the band have been using their lyrics to explore for years now. Monastic Living is saying something, even as it tells you not to listen.

My Bloody Valentine – m b v