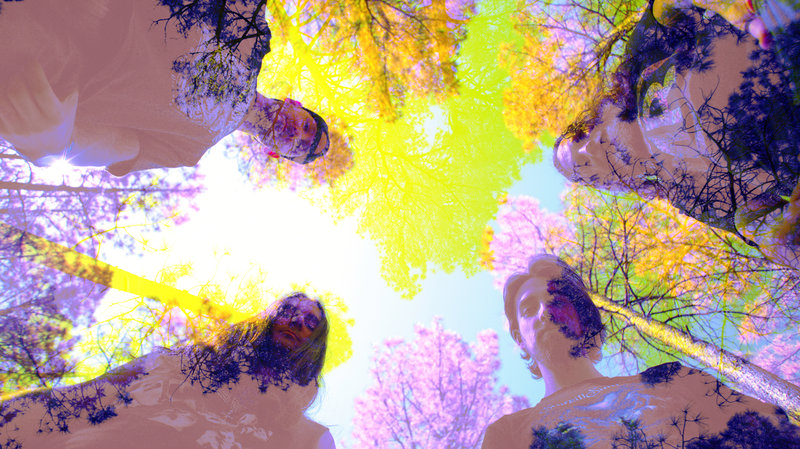 When Nate Garrett, sole performer of progressive doom metal band Spirit Adrift, connected with me for a phone interview, he was on the road by Biloxi, Mississippi, staring at the sea through the windshield of a van. He’s been on the road with Pallbearer, acting as driver for their recent trek across America in support of Baroness. He says that he’s a long-time friend of the band.

“I was actually reminded by Facebook today that four years ago to the day, we were doing the same thing,” Nate said. “We were leaving for their first U.S. tour. I know the dudes from Arkansas and I drove on that first big tour they did. I hadn’t seen them in four years, just briefly here and there, but they hit me up for this one and I was definitely stoked to do it.”

Garrett seems proud, happy, tired, which is fitting given both the scope of the tour and all that his friends in Pallbearer had accomplished in the past four years. Pallbearer in many ways opened the door for a group like Spirit Adrift to be successful, returning progressive-oriented song structures in doom metal to some of the biggest stages of the metal and indie world.

Doom metal in particular is a genre that seems to be growing again as of late, with groups like Pallbearer, Inter Arma and Cough making good on a promise that Neurosis and Rwake once made. And Spirit Adrift’s new Prosthetic-released album, Chained to Oblivion, a massive slab of psychedelic and progressive-tinged doom metal, showcases both the genre’s past and present. Spirit Adrift, like Garrett’s contemporaries, leans a bit closer to classic metal than their legendary forebears in Neurosis; that murky period where hard rock, psych rock and prog rock were still giving birth to a heavy metal that had not yet shed its down and stretched its wings remains the most prominent force on the record. The long, tortured bellow of Garrett across a stately yet crushing psych doom riff, his voice wavering like a caustic Ozzy, singing “Infinite yet torn apart / Bleeding from the cosmic heart / Burn until the stars go dark” on opening track “Psychic Tide” marks the precise moment his hypothetical alternate evolution of doom metal arrives fully into itself, setting a high water mark the rest of the record sits closely by for the remainder of its duration.

In fact, Spirit Adrift shares a lot in common with Pallbearer, in that both bands are taking doom into the future by channeling spirits of its past. She connection that he would happen to be their driver isn’t accidental, Garrett says.

“We all cut our teeth together in Arkansas playing in different bands,” he says. “I think part of it is us idolizing the same kind of bands in Arkansas, like Rwake and Deadbird, and there were some older guys we could learn from. And then for me personally seeing what Pallbearer were doing was a big game changer for me. These guys certainly heavily inspired it, for sure.

“In Arkansas, it was all about…” he continues, pausing for a moment. “I’ve always been about guitar harmonies and riffs, and trying to one-up the riff with the following riff. In that sense, I feel like Spirit Adrift is where everything has been leading for me and at the same time it’s huge growth for me as a songwriter because it just feels so natural whereas in a lot of my previous bands that were similar it was just like riff, riff, riff, riff, riff. But this feels like more a cohesive movement. It feels personally to me like it’s just 100 percent honest and natural. I think the songs have more of a flow to them because there was a lot of work but there was no forcing of anything whatsoever. If something didn’t quite work, I just threw it away.”

That attitude shows on, Chained to Oblivion. It seems to be at peace and not at war with itself. Riffs ebb and flow, truncate and grow organically, moving more by the logic of cadence than a particularly rigid series of eight-bar ideas. 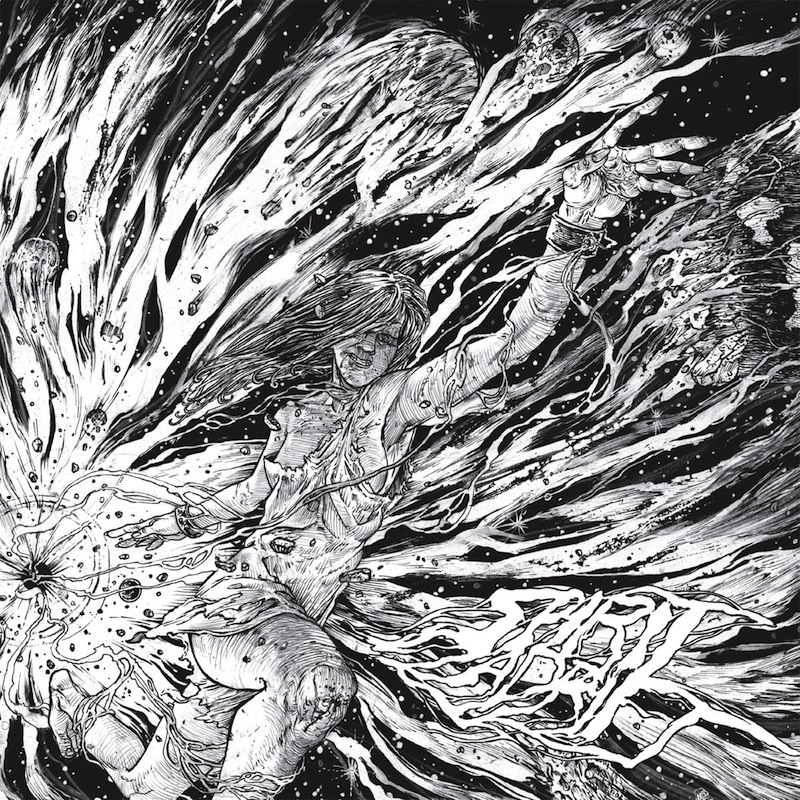 Yet Garrett shares some of his anxieties about making the record, an odd kind of inverse-anxiety that tends to strike artists who are starting to really find their stride: When your new path for work starts bringing you the catharsis and emotional reconciliation you’d always wanted to achieve in your work, how do you keep producing it? How do you keep making viable, necessary art when all the things that spurred you on to begin with start to find natural healthy closure?

“The (Behind-Beyond) EP I just kind of did real quick. Doing that probably brought me to peace with some of the worst aspects of my life,” he says. “I was almost worried after doing the EP like, shit, will I be able to make this as sad and soul-crushing as I want it to be? That aspect of my life is a lot better. But all I had to do is sit around and think for a minute about all the things that still made me want to kill myself, even though some of the problems are solved, you know what I mean?”

He laughs and pauses to consider his next comment. They were to cover, after all, not just the record that just came out, but the EP prior to it and records to come, as well. This is the curse of the artist in interview and retrospection after their debut: They are crafting the first impression, the lattice the group will grow on into the future. It’s a particularly heavy burden for genres such as extreme metal, which are built around focusing on some of life’s heaviest matters, and where sincerity and credibility is paramount in that art being coherent to its listener base.

“Ok, I got some of this figured out,” he continues, “but if I think hard enough, there’s still stuff. I’m definitely still super miserable in certain aspects of my life. I don’t know how to describe this. A big change occurred before I did all this, where if I’m facing anything in life that would have made me want to be very self-destructive or hateful, my duty to myself is to handle it very differently. Like, just breathe, and don’t react from some visceral place like anger and shit, and instead try to solve what’s going on. It sounds really cliche, but try to be proactive instead of reactive.”

He covered some of the obvious basics of metal of 2016: Sabbath worship, Thin Lizzy worship, a weariness toward the H-word. “I saw Inter Arma got called a hipster band,” he said. “It might have been a joke, but I’m so tired of that whole fucking thing. I’m just so over the whole thing. Like, if you say that about Inter Arma, I don’t think you know what a hipster is. The world basically doesn’t have a real meaning anymore, but whatever it is, it’s not them.”

It’s hard to disagree with him on this mark; those guys have slogged it out on the road playing ultra-short opening sets on all kinds of metal bills from North Carolina up to Baltimore for years now and have always stuck around and supported the bands on the bill and been active members of the crowd. Yet while Garrett is outspoken in his support of contemporary players, he channeled spirits of rock and metal legends in making Chained to Oblivion.

He tracked the guitars with the vision of two imaginary guitar players: one influenced primarily by Tony Iommi and the other primarily by Neil Young. The intent, he says, is to evoke the lush guitar harmonies of the greatest band to ever do it, Thin Lizzy. But he had a concern about bringing the fullness of his harmonies into the solos of the Spirit Adrift material as well.

“I was like, man, I don’t know if… Has anyone done anything exactly like this?” he says. “I mean, I know Randy Rhoads has some stuff here and there, but what I realized is, I went and saw The Skull, and I went, ‘Oh, fuck, Trouble does this!’ The Skull is basically Trouble, you know. I mean, they’re playing Trouble songs. So, for a lot of the lead guitar stuff, Trouble was not necessarily a direct sonic influence, but they gave me the courage. I was like, if two guys can sit down and write out a ripping solo that’s harmonized, then certainly one guy with one brain can do it?”

All of these decisions, Nate said, came from a very similar place to the thing that gets bands like Inter Arma or Pallbearer called hipster bands, and that’s drawing influence for making metal from places outside of metal. “Yeah. My very first band was a punk band. Like we played a lot of covers and our originals were somewhere between like Nirvana and, I don’t know, the Pixies. Really, really aggro stuff. My second band was Black Sabbath worship. In a way every band I’ve been in since has been Black Sabbath worship.”

It was also partly from the post-Nirvana state of pop music when he was growing up, when Kurt, Krist and Dave seemed to blow open the doors for more ruminative and angst-ridden pop work than had emerged years. The marriage of difficult subject matter to melodic and catchy material seemed ineffable and impossible to keep alive forever, a fact confirmed by its being swallowed whole by boy bands and singers like Britney Spears only a few short years later. “Something you learn on the road is there’s not a lot of metal getting played in the van,” he said. “You go out there night after night and you don’t want to hear metal right after.” For those of a certain age, those poppier songs you reach for to get you through long drives (such as “Closing Time” by Semisonic and “Torn” by Natalie Imbruglia for Garrett) happen to also contain the same kinds of contortions of spirit contained in great metal, just presented in a different way, with a different set of tools, which cannot help but inform the artist that there might be other ways to approach the work of heavy, crushing emotive songs.

This didn’t at any point amount to Nate abandoning metal in Spirit Adrift, nor a desire to. The accusation inherent in hipster metal, that it is conceived insincerely and designed to crossover rather than celebrate metal in the creation of new work, is incoherent with his work and that of his peers. The sincerity of the work is there, and beyond that the sincerity of the love and adoration of metal is there as well. There’s another important factor, as well.

“You fucking live in a van for five years and work your fucking ass off and see how much of a hipster you feel like,” Nate said.

It’s hard to disagree with that.