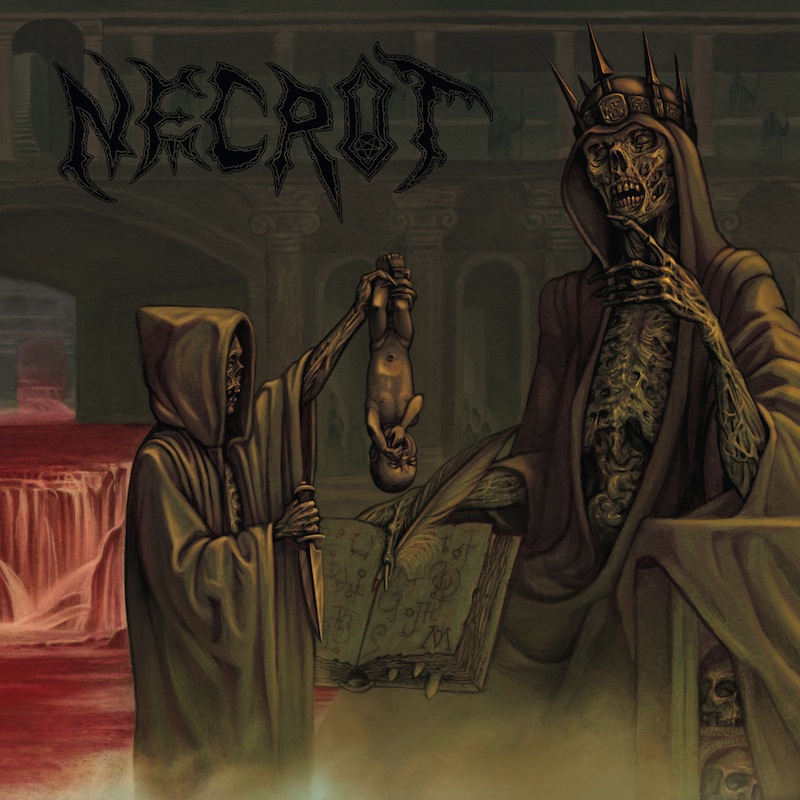 There’s an interesting word association game when it comes to metal in the Bay Area. In fact, “Bay Area metal” itself tends to conjure a very specific image: Thrash metal. And rightfully so; bands such as Metallica, Exodus and Vio-Lence put the region on the map on the strength of their whiplash riffs and furious speed-metal gallop. Then again, a smaller but no less correct contingent of metalheads might look to a very different ideal of metal in the Bay Area: Neurosis. The Oakland sludge metal titans have been operating since not long after thrash took over, and have changed their definition of metal numerous times in the past 30 years. Yet while the death metal scene in San Francisco and Oakland is often overlooked, perhaps because of the cities’ more storied mainstream metal past, it’s remained fertile since the early ’90s, from the brutal beatdowns of Autopsy on up to recent rippers like Vastum. Blood Offerings, the debut album by old-school death metal brawlers Necrot, prove that Oakland is still fertile ground for some of the gnarliest roars in metal.

Necrot, like many other veteran Bay Area metal bands, comprises musicians who have put in work in work in other bands. Guitarist Sonny Reinhardt is best known for performing in stoner metal group Saviours, while bassist and vocalist Luca Indrio splits time in Vastum and previously performed in Acephalix, and drummer Chad Gailey has an impressive enough Metal Archives resume of his own. Suffice it to say this is a band of remarkable talent among the three of them, all of which comes together in the form of eight taut and turbulent death metal throwdowns. Where the charm of a vintage death metal album was often in how quickly it seemed things were headed toward going entirely off the rails, tremolo picking and blast-beat breakdowns spiraling out of the metronome’s tick, Necrot work together amazingly as a unit, a track like opener “The Blade” as much a showcase for hot-dog instrumentalism as it is a blistering chug-and-gallop.

Blood Offerings features few moments that don’t speed by at the Four Horsemen’s clip. Once “Shadows and Light” takes off, it scarcely lets up from its menacing ride to oblivion. And the band doesn’t miss a beat in transitioning from twisted and torturous riffs to a power chord pummel in the title track, proving they can keep the circle pit going without interruption. And all the while, Blood Offerings has a level of energy and melody that’s not necessarily innovative in itself but refreshing all the same. It’s an album that does the region’s growling, guttural legacy proud, and with a new layer of contemporary punch.