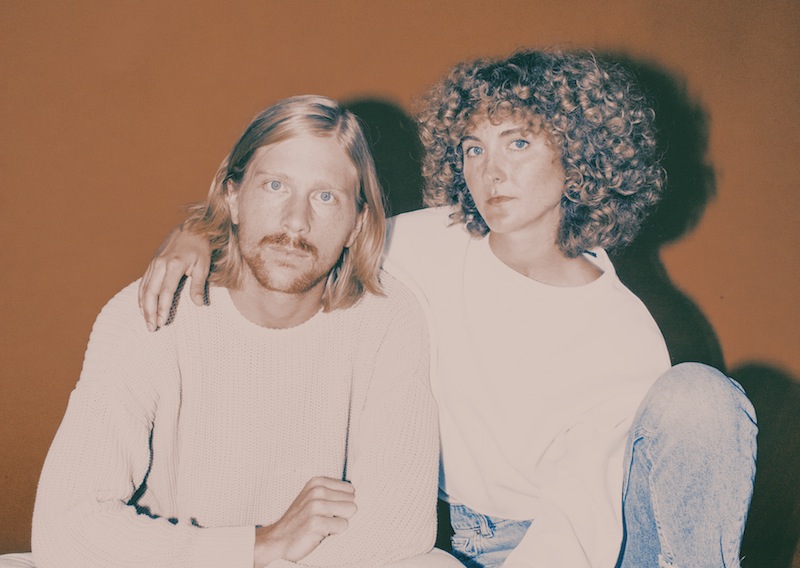 Tennis, the Denver-based husband and wife duo of Patrick Riley and Alaina Moore, have been making music together since 2011, starting with their debut album Cape Dory. Since then, they’ve gone on to create equally soulful and elegant music, each album adding another layer of understanding and sentiment. Last week marked the release of EP We Can Die Happy, comprising five tracks oozing with love and gratitude. The band will be touring the west coast until late December, then picking up with the East coast after the new year, all dates can be found here. Alaina spoke to us about self care, living a simple life, and making the music she and Patrick want to hear.

Treble: Your music has such a warming quality to it, which is great—it’s almost like traveling to another world. How do you keep your sound so upbeat despite the turmoil our society is facing?

Alaina Moore: That’s hard—I think mostly, it stems from Patrick and I writing the type of music that we want to hear, which tends to be happier. I think I haven’t really been into like, really depressing music since high school and early college when I was very emo, and since then, it’s more like equal opposites I guess. So it’s not like I’m uninvolved or unaware of the world or what’s going on in it, and it’s pretty heavy right now, but music is completely aesthetically motivated for me so…we want our music to be that perfect blend of happy and sad, like not too saccharine but not too dour, and that’s always kind of what we’re looking for.

Treble: It’s a really good thing to turn to, so I’m really glad you’re making the music that you’re making. How do you practice self care given the political climate?

AM: I tried meditating, but that didn’t work, it’s not really my thing, but I do do yoga, which has been pretty amazing. I feel like a touring lifestyle is pretty unhealthy in general and terrible for your body, so yoga’s been really nice and kind of key for me to get out of my head. Weirdly, self care for me is cleaning. It sounds insane but I love cleaning, it’s like the only way I feel I can have control over anything is how clean something is. [Laughs] My sisters think I’m crazy, but that and making some time for myself, maybe more like when I’m home, I like to be alone a lot, which is so different from touring where I’m always with the band or shows where I’m performing. So definitely a form of self care is a lot of alone time, whether I’m just reading or cooking dinner with Pat or more likely watching Pat cook dinner, cause he’s the only one who cooks. [Laughs] Just paring things down and keeping it pretty quiet, not socially overwhelming or anything, I’m still figuring it out. I feel stressed right now, so I’m not doing a good enough job of self-care obviously.

Treble: I totally agree with the cleaning thing if that makes you feel any better, I always clean to make myself feel better.

AM: This is a new thing for me, I was a huge slob in my early twenties, which I don’t really know any twenty-year-old who is very tidy, but yeah, now I’m the opposite. I clean floorboards and stuff like that, behind toilets, the weird crazy things, that’s the kind of cleaning I do.

Treble: What is the songwriting process like? Do you usually have the lyrics first or the instrumentals?

A: Every song is different. It depends on whether or not Patrick wrote the song, or I wrote the song, we usually write each like 50/50 to a record. Usually, songs that I write start with chord progressions, or melodies, every once in a while I’ll have a lyric-based song, but that’s rare for me. Patrick doesn’t write vocal melodies or lyrics, so it’s always just chord progressions or a drum beat for him.

Treble: Sailing has played a pretty big role in some of your other albums, so did that come into play with this EP?

AM: With this EP, we are still in that different mindset we were in when we wrote Yours Conditionally, where we basically discovered a kind of freedom where we can live and be happy with almost no money and nothing going on, which is living on a boat. It’s such a small, simple way of living. It gave us so much freedom and confidence because the normal pressures of having to earn a lot of money or find a lot of success, we figured out that those don’t need to have any power over us, we found a life that is so appealing and fulfilling, that doesn’t cater to any of those things, so having sailing right in the background of everything we do, it’s like our safety net basically. It makes songwriting a lot more free and confident, because I don’t really need it to be anything. Obviously I’d love to be successful and have people listen to our music, but I know that I can still make music and live a really small pared-down existence—does this make sense, what I’m saying? [Laughs]

Treble: It does, and it’s really refreshing, because I feel like we’re just bombarded all the time with “make this much money” and “buy this new thing” but being able to just live and not need any of those things is great.

AM: Right, finding a context where you can be happy without [things] is like the greatest relief, because I am materialistic, I like nice things, I like nice furniture and nice clothes, it’s hard not to be tied up into that world, but knowing that I can strip it all away and find a lot of happiness is just…I try to make that foundational to my writing, so I can just make music as it wants to be and not put pressure on it.

Treble: What are you listening to these days?

AM: There’s several new female projects that I’m super into, this girl Kacey Johansing, she’s so good, I think she’s from Wisconsin. Her album’s called The Hiding—she has just one record, it just came out. It’s so beautiful, it’s glorious. There’s another record from Anna St. Louis that just came out this week, that’s pretty folky and country. It’s almost like a girl—I don’t want to say this, because I feel wrong comparing her to a guy, but she kind of reminds me of a female Kevin Morby, who is amazing, I just feel bad comparing her to something right when she’s started. Normally I’m out of touch, when we’re actually songwriting, I don’t listen to anything new, but because we’re touring the record and I’m not writing at the moment, I can just dive into whatever’s just coming out.