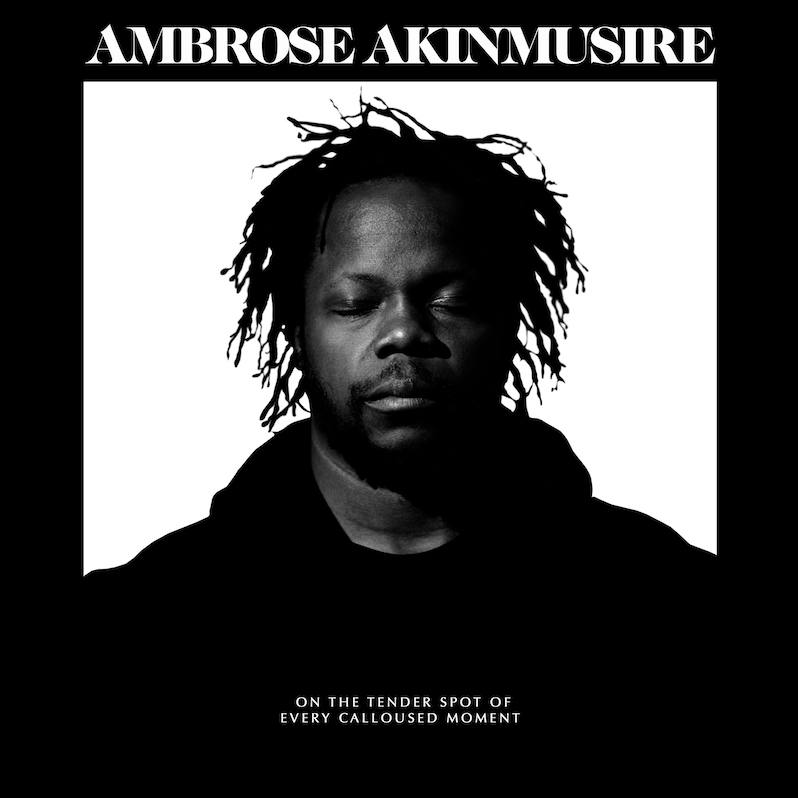 The first thing you notice on Ambrose Akinmusire’s new record on the tender spot of every calloused moment is the sense of breath in his trumpet playing. Akinmusire clearly has spent the past nearly four decades of his life learning not just what notes the trumpet can play, but what sounds, what timbres it can create. His horn feels alive at his lips, cutting quick from sharp and brassy and full of sass to a breathier and more fibrous tenor not unlike Mathias Eick. This sense of deep care in both the playing and engineering of the other instruments at play (piano, drums, double bass, occasional vocals) is one of the great charms of on the tender spot. It is a means of affirming the eventness of music, that what matters is not always song and lyric but well-orchestrated clouds of sound produced well, not unlike laying on your back in the middle of a throbbing and thriving city street or vine-choked jungle teaming with life.

The pieces here live in the world of cool jazz, ballads and modal work, seemingly drawn deep from those magical records where Miles Davis and Wayne Shorter were laying down some of the best melodically-driven cuts of their career. Akinmusire clearly is a bit too keen on the history of jazz, however, to foolishly believe that resting easy in the tuneful and cool atmospheres of West Coast and Third Stream jazz can fly comfortably in the twentieth century without feeling like deliberate retro kitsch. The spicy element he throws in, the fire beneath the pan, is a constant sense of freedom, the extended techniques and wild post-serialist approaches to improvisation from free jazz meant with the deep rhythmic thrust of free-funk. A great melody is never more than a stone’s throw away, however. “Tide of Hyacinth”, the first track on the album, is a stormy and eventful eight-minute suite following in a series of short juxtapositional passages, roiling buzzing drum rolls cascading into neurotic atonal piano streams and Akinmusire’s living breathing trumpet. That this then simmers gracefully into “Yessss,” a smiling and starry ballad, all grace and beauty, is a wonder. This sense of interplay between unfettered and sheer wildness and touching graceful beauty becomes the running theme of on the tender spot of every calloused moment, a dialectical dance between two seeming extremes.

This reveals the next layer of Akinmusire’s musical thought. These disparate elements (cool jazz, West Coast jazz, Third Stream, ballads, free jazz, funk) slowly coalesce in a shapeful but aimless dance, like sparks kicked off of the same fire. He hangs them across the record like stars in a constellation, a nebula of differing and sometimes warring approaches to jazz united by a singular aesthetic impulse. When the drums take on a hip-hop lilt or a gospel-tinged organ starts to hum angelically away in the background, it is at first a surprise and then obvious. What’s more, Akinmusire’s arrangements and chosen takes focus on the sense of effortless, natural, relaxed organic feeling that tends to compel cool jazz and the like rather than the frenetic and sometimes awfully constructed deliberacy free music can move with. These aesthetic strands don’t become syncretized into some dead academic totem of jazz history but instead intermingle and converse like neighbors of a township.

This approach also sustains the natural powers of each isolated idea on on the tender spot of every calloused moment, allowing the free passages to remain jarring and discombobulating rather than eventually melting away into their own rabid alien logic, just as the cool or ballad portions suddenly seem to burst out of the speakers in a tuneful songful melody. One of the great challenges when balancing this many different music approaches on one record is making sure each song or composition stands on its own, doesn’t just become another species in a prolonged and dry academic study. These songs heave with life, be it a starry-eyed melody wistfully dreaming in cigarette smoke or the deep pocket post-Hancock hip-hopisms that are sprinkled across the record. It feels sometimes like a haggard crystal, clean-cut facets in seemingly irregular shape throwing strange color across a dimly lit room, such that you could turn the crystal over and over again and never quite capture the same color more than once.