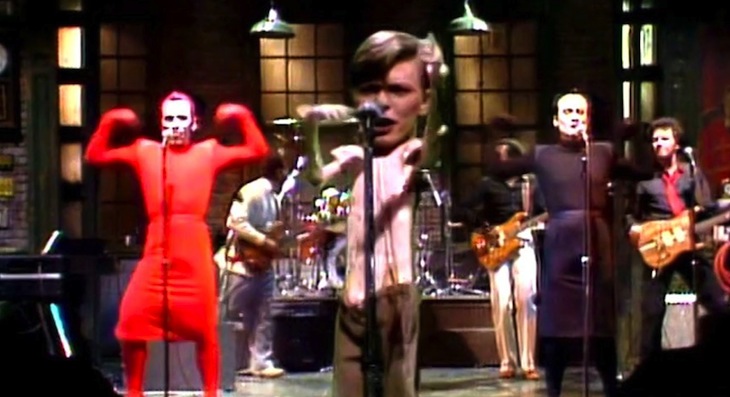 This month, Saturday Night Live turns 40. That’s a hell of a milestone. It’s longer than most music venues last, definitely older than most of the record labels we write about, and it’s launched the careers of more comics and actors than we can count. And the long-running NBC institution has also hosted a number of incredible musical guests, too many to mention in one article. But the show’s impending anniversary does present an opportunity to highlight some of the historic performances that have taken place at 30 Rockefeller Plaza over the years. We’ve chosen 10 that left an impact in some way — either for being hilarious, scandalous, groundbreaking or just plain show-stopping. Join us as we tip our hat with 10 classic SNL musical performances.

It had been two years since the emotive British hippie singer scored a big hit covering Billy Preston’s “You are So Beautiful,” yet he fit perfectly into SNL season two and its roster of musical guests leaning heavily on hirsute white rockers (Tom Waits, Kinky Friedman, George Harrison, Leo Sayer). Audiences were treated to a surprise during his second number, 1969 single “Feelin’ Alright,” when he was joined onstage by cast member John Belushi in character—as Joe Cocker. It was an impression Belushi had honed in clubs for years, bringing it to SNL almost exactly one year earlier in place of an actual musical guest. But this was far different from The Blues Brothers or some other mere skit. This was a flameout comic sharing the stage with his burnout source material to create a masterfully spastic, lovingly warbled performance. – AB

SNL had seeped into mainstream consciousness by the end of the 1976. As the first wave of American comedians who had a regular, weekly platform to radicalize the art form in the haze of irreverence and medicinal excess, they could afford to take some calculated risks with their musical guests. It’s difficult to tell whether Frank Zappa bought into the SNL ethic, but his December ’76 performance of “I’m the Slime” (“oozin’ out from your TV set”) served as a grand piss-take on the hand that was giving him appetizers that night. Now it’d be considered a meta-commentary that finds easy access on all mediums these days, but back then it was startling. The best part of the performance was Zappa’s clever rope-in of beloved SNL announcer Don Pardo, who recited the second verse in true man-behind-the-curtain style as Zappa fed him the lines from a blackboard. Also of note was the rig installed underneath the studio monitors mere feet away from the audience, from which a truly unsettling stream of viscous goo discharged through inch-wide portals as nearby watchers didn’t know whether to laugh or wretch. Point taken. – PP

After an uneventful run through “Watching the Detectives” on this third-season episode, the plan according to Elvis Costello’s label and SNL staff was to play “Less than Zero,” the band’s new single in the UK off of My Aim is True. But Costello felt the song’s regional politics weren’t relevant to a US audience, so seven seconds into it—“I’m sorry, ladies and gentlemen, but there’s no reason to do this song here.” The band then went meta and ripped into “Radio, Radio,” a new track about corporate control of broadcasting. It was here we learned that even on an improv comedy show, you do not go out of your way to surprise producer Lorne Michaels; he banned Costello from SNL for 12 years. Although actually inspired by a stunt Jimi Hendrix pulled in 1969, Costello’s reprogramming seemed more in the spirit of the band originally booked to perform on that SNL stage: The Sex Pistols. – AB

Devo broke through on MTV with “Whip It” just a couple years later, but in 1978 it surely must have been peculiar to see the jerky new wave outfit doing utterly bizarre things with Rolling Stones songs on a relatively mainstream show. Devo showed up in radiation suits and skronked the hell out of this highlight from Q: Are We Not Men? A: We Are Devo, complete with plenty of gnarly guitar theatrics and robotic dance moves. Say what you will about the band’s music (as long as it’s something along the lines of “brilliant, groundbreaking etc.”), but Devo were one of the most telegenic bands of the new wave era. – JT

Whatever the occasion, David Bowie will inevitably steal the show, and Saturday Night Live is no exception. In 1979, around the release of his album Lodger — the third in his Berlin trilogy — Bowie performed a series of songs with singer and performance artist Klaus Nomi, who himself had a bold Kabuki-inspired look. But Bowie used the slot as an opportunity to experiment with some peculiar visuals, singing inside of an odd sarcophagus suit for “The Man Who Sold the World” (and had to be carried to the mic by his backup singers) and then using a green screen to make his body disappear behind a marionette for “Boys Keep Swinging.” While the technology wasn’t advanced, the spectacle is still fairly jaw-dropping 36 years later. – JT

Take a look through the archives of Saturday Night Live’s musical guests and you’ll end up doing more double-takes than you might expect. Gil Scott-Heron and Sun Ra each did some pretty spectacular performances in the show’s early days, but few performances in the first decade seemed as left-field as the show’s booking of Los Angeles hardcore punk act Fear in 1981. John Belushi, it turns out, was a huge fan, and ended up getting the band on the show. What ensued, more or less, was utter chaos. The band played two blistering rippers, complete with stage diving punks in tow (one of them Minor Threat’s Ian Mackaye!). A fair amount of property was damaged in the process, though the band’s harshest act was in introducing a song by saying “It’s great to be in New Jersey.” That didn’t go over well. – JT

The story is legend at this point: Minneapolis punks The Replacements were a well-known loose cannon in terms of live shows. Their wild, classic-rock influenced post-punk was invigorating, visceral and often heartwarming, but also fueled by drunken debauchery. While the quartet would often blow audiences away with powerful sets, they were just as likely to perform a full set of cringe-worthy covers or, worse, simply show up too drunk to play.

For their 1986 SNL appearance promoting Tim, the ‘Mats decided to split the difference between the two. Their first performance, “Bastards of Young” was a bit rocky but good enough to slide by, but the real magic happened when the band got abundantly wasted in the green room, switched clothes with one another, and completely stumbled through a song that somewhat resembled “Kiss Me On The Bus.” Lorne Michaels was not pleased. (Notice the distinct absence of the band from the traditional ‘camaraderie’ shot at the episode’s close.)

Was it embarrassing? Sure, but maybe not for the Replacements. After all, the team at SNL should have done their research before inviting one of the nation’s most debaucherous bands for a night of free booze in exchange for a two-song set. After all, it’s that pungent lack of maturity and regard for authority that made those very songs so meaningful in the first place. – ATB

I had not actually seen Faith No More perform live until I watched their SNL performance. I distinctly remember the shock of seeing Mike Patton for the first time. Patton, donning a Goodwill-quality salmon colored striped suit and a t-shirt, and that disgusting long-on-top-but-shaved-on-the-sides kind of haircut that the bully at your middle school used to have, stomped, staggered and fell all over the stage, his eyes possessed by his paradoxical disdain for fame and flair for the dramatic. As Jim Martin began his solo halfway through the performance, Patton scurried to the back of the stage, scaled a speaker stack, and weaved himself into the blades of an unpowered electric fan before he leaped down and resumed with the final chorus. As the song ended, he spun and stared down as if he’d put himself in time out, and apathetically checked his watch as he walked off the stage. Patton’s antics continue with “From Out of Nowhere” as Patton vigorously headbangs and crawls on the floor. Metal is scarcely represented among SNL’s musical guests, but Faith No More’s performance on SNL adequately captured the aggressive and rebellious ethos that made them the soundtrack to many people’s teenage years. – TH

The Irish alt-chanteuse had started to cut a distinctive figure in pop culture with “Nothing Compares 2 U,” but her career took a creative left turn on her 1992 standards album Am I Not Your Girl? and then imploded with an act of protest early in SNL season 18. She sang a harrowing a cappella version of Bob Marley’s “War” reworded to address sexual abuse in the Catholic Church, surely an important cause to champion. But without clearly explaining that motive, all people remember is the end when she tore up a picture of Pope John Paul II and said, “Fight the real enemy,” the moment left to echo and linger in a silent studio. Show staff had no hint of O’Connor’s plans; Michaels, NBC executives, and the viewing public were incensed. Her appearance at a Bob Dylan tribute concert a few weeks later was shouted down, and SNL writers and performers burned Sinead in comic effigy multiple times during season 18. It’s one of those rare moments in series history where a guest would leave the show not just banned, but a pariah. – AB

“Black Skinhead” wasn’t Kanye West’s first SNL performance, and probably won’t be his last, but I’ll be damned if it wasn’t his most striking television appearance to date. I’ve been straightforward about my opinions on Yeezus (I found the end-product to be a bit over-praised), but I was completely blown away by West’s complete change of tone when he chose to reveal brand new material (“Black Skinhead,” followed by “New Slaves”) in such an awe-rendering manner. Armed with a skeleton-crew band and the most abrasive multimedia performance Saturday Night Live will ever see, Yeezy hijacked the comedy show with never-before-heard lyrics addressing racism within American pop culture. At this point in time, I hadn’t been paying attention to SNL for a while; West’s well-executed stunt had my eyes glued firmly on the nearest screen. – ATB