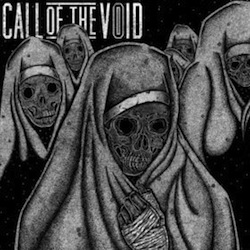 There are blast beats on Call of the Void‘s Dragged Down a Dead End Path. There are also d-beats. There are ominous doom-metal rumblings and sludgy churns. There are grindcore breakdowns, ghastly roars, chilling samples, massive riffs and even the occasional fist-flying, mosh-pit, scream-along chorus. Indeed, there is a lot happening on the Colorado metal act’s debut album, that at times it can overwhelm. But for all much chaos and torpor that the band wedges into this half-hour of crusty wreckage, the kernel of what the band does — manic, sludge-caked hardcore — never wavers.

Call of the Void, formerly known as Ironhorse, purvey a thick and venomous crust-punk sound that’s rooted in Discharge-style hardcore, yet the band has fun with it on Dragged Down a Dead End Path, pulling its stylistic edges like taffy into amorphous and pliable forms. Purism has no place here. The band implicitly states as much within the first track, “Failure,” which slowly transforms from an atonal doom-metal boom to a fiery death ‘n’ roll blast-beat destruction party. And it’s damn fun, too! Ditto “Bottom Feeder,” which manages to transition from a relentless grind into a soaring and transcendent slowed-down climax in less than two minutes. The hilariously titled “I Hope You Two Fuck,” meanwhile, boasts the highest concentration of hooks, its power-chord riffs recalling Badmotorfinger-era Soundgarden as much as Trap Them.

It’s not often that a word like “playful” can be used in the context of a metal album, but Call of the Void aren’t just adhering to any old idea of what hardcore is supposed to be, they’re having fun with it, screwing with the formula and doing what just plain feels good. That’s what heavy music does when executed properly — it feels good, cathartically and aurally. Call of the Void succeed on both counts, making music that warrants a smile even at its most bruising.

Tags
Call of the Void

Call of the Void : Ageless